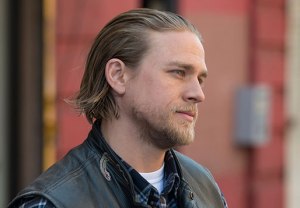 Anytime you’re watching Sons of Anarchy — especially this final, gruesome season — you’ve got to prepare yourself for a few casualties. It’s just par for the course with the FX drama, which has racked up an impressive body count in the past six episodes alone.

But there are some Sons characters you just hope will never be in the line of fire, and when they are, it’s all you can do to remember that this is a work of fiction.

This week, I’m of course talking about Bobby, who found himself caught in the crosshairs of an outraged August Marks. And while we can assume that Bobby isn’t dead, the brutal removal of his eyeball via Marks’ security team confirms what we already knew: that even SAMCRO’s best-laid plans have their consequences.

Still, Bobby’s unfortunate encounter with Marks’ crew was just one of a few big highlights in Tuesday’s episode. While you recover from the hour’s devastating final minutes, let’s go over the highlights of “Greensleeves”:

BAD MARKS | As they carry out the next phase of Operation Take Down August Marks, SAMCRO turns to Leticia and Grant, the wife and stepson of dearly departed Pastor Jonathan Haddem. Unfortunately, it wasn’t enough for Leticia to sign the paperwork that moved Marks’ government housing project along. Now, the club needs her and Grant to sign a statement saying Marks forced them to file that paperwork — and in order to get them on board with the idea, Jax lies that Haddem was killed by Marks, who then buried Haddem’s body at a Pope construction site. In return, SAMCRO agrees to take care of a pimp named Greensleeves, who has been blackmailing Haddem’s family with cell phone footage of the pastor spending inappropriate time with “very young men” at his lake house. (I legitimately shuddered at the thought.)

The club also offers to take Grant and Leticia to their cabin a few hours away, where Gemma can help wean Leticia off the drugs she’s been using. But more on that in a minute.

WHAT’S IN THE BOX? | In the meantime, Jax and Chibs enlist Nero’s help to find Greensleeves, who is all kinds of skeezy. Case in point: He sweet-talks his prostitutes with lines like, “Who puts the oh in ‘ho’?” How charming! Greensleeves manages to escape the first time he’s confronted by Jax & Co., but they soon track him down at his bachelor pad after his best girl, Winsome, offers up his location. (In return for the intel, Winsome’s getting a full-time gig at Diosa, and probably a friends-with-benefits relationship with Jax, if their immediate chemistry is any indication.) It’s not long before Jax and Chibs track down Greensleeves, collect the incriminating cell phone footage and promptly send Greensleeves straight through a glass window. So far, everything’s going according to plan… 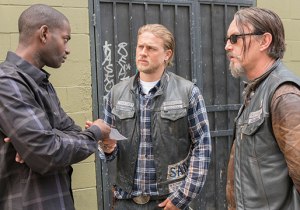 …which means everything is about to fall apart, naturally. Jax and Chibs next meet with Tyler of the One-Niners, handing over Leticia and Grant’s signed statement and photos of Haddem’s body buried at Pope’s construction site (courtesy of SAMCRO). Now, all they can do is wait until nightfall, when SAMCRO and the Mayans will meet with Marks and his men. But Marks decides to strike while the iron is hot: While Bobby is making a solo trip up to SAMCRO’s cabin, to ensure everything is going well with Haddem’s family, he gets run off the road by Marks’ security team, and he can’t get away from the men fast enough. That night, after Marks is an hour late to his meeting with SAMCRO, the club instead gets a visit from Moses Cartwright, head of Marks’ security team, who delivers a package (and a cryptic remark about the importance of brotherhood) to Jax. Inside the box, the club finds Bobby’s “Redwood Original” patches, taken from his cut, along with a video of Marks’ men removing one of Bobby’s eyeballs right out of his head — an eyeball that now rests in SAMCRO’s possession. And if it doesn’t break your heart to watch Bobby get tortured, surely it ruins you to see SAMCRO sit in stunned silence, with Chibs barely keeping it together.

LOST IN TRANSLATION | But let’s get back to SAMCRO’s cabin. After Jax offers Leticia and Grant a safe place to say, he tells Happy and Ratboy to retrieve Gemma and get her to the cabin for rehab purposes. But when Gemma finds out where she’s being taken, she’s visibly shaken, certain that she’s going to the cabin so Jax can punish her for the many sins she’s committed. When the boys stop at Gemma’s house so she can pack up a few things, she grabs her gun, then spends a few moments with Thomas, “the only one that really needs to know.” Within seconds, Gemma is sobbing an apology to her grandson, insisting that Tara’s murder was an accident — and right at that moment, Abel (who’s home early from school due to anger issues that we all saw coming) overhears his grandma’s confession from the doorway. That thump you just heard? It was my jaw hitting the floor.

Before she leaves, Gemma implores Wendy to get Nero to the cabin to help her. Meanwhile, Unser also gets a frantic call from Wendy, which he relays to the Sons, mentioning how freaked-out Gemma is that she’s headed to the cabin. (That’s why Jax sends Bobby to check up on things… and we all know how that works out. Sob.) Once she’s at the cabin, Gemma keeps her gun close… but she soon realizes that she really is there to help out with mother-son club business. Nero arrives a while later, but Gemma’s no longer in the frazzled state she once was. Bullet: dodged. At least until Abel spills the beans.

* Desperate to get back in SAMCRO’s good graces, Juice intentionally gets arrested by the California Highway Patrol, which sets in motion a long-term plan to kill Lin while he’s in county jail. All it takes is a little conspiring with Ron Tully’s men, which kicks off near the end of the hour. The only problem? When Unser informs Jax and the boys about Juice’s arrest, he can tell they were involved in the ordeal — and they’re using Juice to pull off something big. (And so, so misguided.)

* Hoping to get out of the street-war lifestyle sooner rather than later, Nero tells Gemma that he plans to sell his share of Diosa to Jax, before taking over his uncle’s farm far away from SAMCRO’s business. When he asks Gemma to come with him, grandsons and all, he breaks down thinking about all the “bad s—t” in Charming that they could potentially escape. Major props to Jimmy Smits and Katey Sagal in this scene, who seem to recognize all their past sins even as they’re hoping for a better life. (“We deserve something better than this,” Nero insists. “Do we?” Gemma responds, in an unexpected and poignant moment of self-awareness.) Later, Nero tells Jax about his plans to get out, but Jax tries to assure Nero that the conflict on the streets is nearly done. (Nope!)

* Unser informs Jax that Officer Eglee is now awake — but she’s only spilling to Unser about who was really there on the day she was shot. As long as Jax can promise that the Aryan Brotherhood won’t come after her, Eglee will keep her lips sealed about SAMCRO’s presence at the incident. (Anyone else have a bad feeling about this?)

OK, your turn. What did you think of Tuesday’s episode? Did you get a little choked up at Jax’s monologue about SAMCRO’s unflinching loyalty? (Especially given Bobby’s fate at the end of the hour?) Hit the comments with your thoughts.