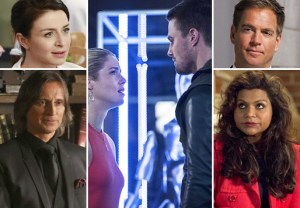 Question: Do you have anything on Laurel and Oliver on Arrow? I’m dying here! —Micaela
Ausiello: Would you settle for something on Ray-Felicity-Oliver instead? (You’re gonna have to, ’cause it’s all I gots!) Felicity will announce her new gig working for Ray at the start of Wednesday’s episode, triggering this passive-aggressive reaction from Ollie: “He pauses for a second then keeps going and changes the subject,” Stephen Amell previews. But it sure seems like things are a little tense in this sneak peek, eh? “[We’re] certainly going to learn how Oliver feels about it,” Amell confirms. “It comes to a head towards the latter part of our fall run.” Meanwhile, if you were wondering, like us, whether there would be any residual awkwardness between Felicity and Oliver, given what transpired in the season premiere, Amell notes, “I’ve always strived [to make] sure [Arrow] relationships are adult relationships. You can kiss someone and you can profess something to them, but that doesn’t mean you avoid eye contact with them. There is a bigger goal and a much bigger circumstance at play. So, [while] I’m sure things are awkward, they’ve got work to do.”

Question: Any Once Upon a Time scoop about ‘Rumbelle’? —Serena
Ausiello: Sunday’s reveal that Rumple is after the Sorcerer’s hat and all the magic it contains certainly doesn’t bode well for the couple’s future. “He definitely loves her and wants to be with her, but the hat existed long before she came along and will probably exist long after she’s gone,” muses Robert Carlyle. “This quest is so massive for him. This addiction is huge. [It] drives Rumplestiltskin more than love.” 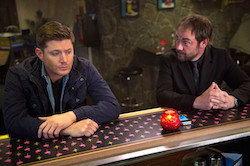 Question: Any Supernatural scoop? —Frances
Ausiello: Now that the bromance between Dean and Crowley appears to be over, the King of Hell is going through an identity crisis of sorts. “The journey’s a little different than last year,” Mark Sheppard explains. “Last year, the human element was the problem. I still think there’s a residual issue there. [Now] Crowley’s re-evaluating his position as King of Hell and his friendship with Dean. But I know there’s a lot of affection there between the two of them, whether Dean agrees to it or not.”

Question: I’d love some info on Felicia Day’s Supernatural return. —Estée
Ausiello: Day’s Season 10 comeback — which the actress is currently shooting — will present “a Charlie we haven’t seen before,” executive producer Robert Singer teases. Adds Day: “She comes back from Oz, and her experiences there have changed her.”

Question: Any NCIS spoilers about Tony’s love life? Will any sparks fly between him and his old partner from Philly or the FBI agent he’s partnered with for a case? – Connie
Ausiello: As you’ve seen since sending this in, Tony and G-woman Leia “Hates Star Wars” Pendergast seem mutually keen on each other. And sparks will also fly between DiNozzo’s old Philly PD partner (to be played by 24’s Marisol Nichols) and… McGee? As Sean Murray shared, “She’s slightly insulting to McGee when he first meets her, so he’s not sure how he feels about this woman.”

Question: I’m in need of something Elementary-related, particularly about Joan and Sherlock as friends and partners. What can we expect from Season 3? –Amanda
Ausiello: Although the former partners’ relationship is now strained, Joan is still looking out for Sherlock and what’s best for him — especially since she’s not around to rein him in anymore. “Bell and Joan will get to talking about Kitty and Sherlock’s ability to be a true mentor,” executive producer Rob Doherty previews. “And they’re both right to have some concerns. Bell points out that Joan always provided a balance or a counterbalance to Sherlock. And based on what they’ve seen from Kitty in the first couple of episodes, the dynamic, the polarity, seems to have switched. If he’s balancing her, who’s balancing him? Is this ultimately a combustible relationship? So, Joan feels a certain obligation to try to get a better sense of how those two are working together.”

Question: The Flash. Obsessed. Scoop me. —Gerald
Ausiello: Now that Joe is helping Barry in his quest to clear his dad’s name, “Things start to be revealed pretty quickly after Episode 3,” Grant Gustin says. “Joe is spending a lot of time looking into things that Barry wouldn’t necessarily think to look into.” Meanwhile, Barry will remain in the dark about his other father figure, Dr. Harrison Wells, and his secret agenda. “Barry has moments where he doesn’t necessarily trust him, but there’s no real, like, questioning his character too much from,” says the actor. “He’s finding flaws in him, so he’s kind of fallen off the pedestal a little bit. But there’s no real like, ‘What’s this guy up to?'”

Question: I need Reign scoop! I’m dying over here with the promo of Mary being pregnant! I’m a big fan of spoilers, and one I found hinted at a possible rape storyline and the potential that that’s where her pregnancy comes from. Can you confirm or deny?  — Julia
Ausiello: I can’t confirm or deny, Julia, but I can tell you that the p-word will continue to weigh heavily on both Mary and Francis in the weeks to come. “Becoming pregnant and having a child is still one of Mary’s top priorities in Season 2,” executive producer Laurie McCarthy says. “At that time, one of the most important responsibilities for any queen was to produce an heir.” As for how that heir is produced, I suppose anything is possible.

Question: Any Reign scoop? —Charlotte
Ausiello: You want it, you got it, Charlotte. Episode 10 will introduce Conde’s brother, Antoine, whose lust for power — specifically power over France — might just outweigh his loyalty to Francis. In addition to being “charming” and “sexy,” he’s also described as a “bad influence,” so it’s safe to assume he’ll gain a few allies in his quest for the crown. 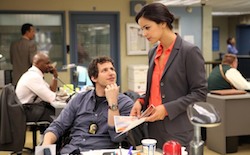 Question: Any chance you have a Brooklyn Nine-Nine spoiler? – Kendall
Ausiello: Look for Jake and Amy’s mutual (and suppressed) attraction to come out in the open at the worst possible time: during a couples’ weekend getaway with their respective romantic partners, Sophia (special guest star Eva Longoria) and Teddy (returning guest star Kyle Bornheimer).

Question: I’m dying for Karmy to happen on Faking It. Am I crazy for holding out hope? — Sarah
Ausiello: You’re not crazy, Sarah, but I hope you’re patient. “Right now, Karma’s all about Liam,” Rita Volk (aka Amy) concedes. “Maybe one day, she’ll wake up and say, ‘I want to experiment’ or ‘I do have feelings for Amy.’ But right now, that’s just wishful thinking; if it happened anytime soon, it would just be catering to what people want, and it wouldn’t feel organic.” Adds co-star Michael Willett, “Whether or not they’re lesbians, they’re a symbol of what girls really hold closest to them: their friendships.”

Question: I’m considering breaking my Gotham habit if things don’t improve quickly — unless you give me a reason to keep watching. I trust you, Aus! —Nick
Ausiello: I suggest sticking around through at least through Episode 7 (airing Nov. 11). Word on the street says it’s all kinds of fantastic — and there’s a massive twist ending, to boot.

Question: Hey, my question is about Hawley on Sleepy Hollow. Does the show plan on making him a romantic interest for Jenny or Abbie? —Melissa
Ausiello: Hey, we asked Lyndie Greenwood the same thing, and while she maintains she’s “in the dark” about which Mills sister Hawley ultimately will pursue, she’s not worried, either way. “Abbie and Jenny have fought so hard for [their] relationship,” she says. “They have had way bigger problems than some dude coming into their life and upsetting things.” Still, expect at least a little sisterly static. “Of course, it’s an issue,” Greenwood previews.

Question: Do you have any scoop on what’s to come in Season 4 of Grimm? —Jordan
Ausiello: Remember that spell Adalind performed to de-Grimm Nick? It’s going to have long-reaching — and potentially game-changing — ramifications in the first half of the season.

Question: When are we going to meet Mindy’s parents on The Mindy Project? —Wendy
Ausiello: “I think we’re going to toward the end of the season,” creator/star Mindy Kaling says, adding that the casting isn’t going to be easy. “The kind of parents that created this person is, for whatever reason, for me much more challenging to picture than the ones who created Danny… We’ve been putting it off for a while, but we will see them.”

Question: I need more Danny dancing on The Mindy Project. Tell me there’s more on the way. —Carrie
Ausiello: Sorry, but Dr. L is definitely out (of moves), despite how much all of us would like to see Chris Messina in action once more. “The reaction to it was so positive,” Kaling tells TVLine. However, “Like anything else, we don’t want to just take that toy and break it. So I think we’re not going to see that for quite a long, long time.” 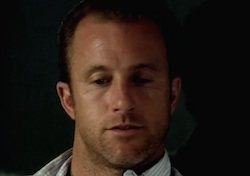 Question: I’m still in shock after the ending of Hawaii Five-0 this past Friday. Are we going to see how the choice Danny made affects him? Are we going to revisit this? I need answers please! — Barb
Ausiello: I’m going to let Ask Ausiello’s Hawaii correspondent (aka Five-0 boss) Peter M. Lenkov tackle this one. “Barb, funny you should ask, I’m right now writing the episode where Danny has to face the consequences of those actions. Of course, there will be a build up to that story… Danny will have to break the news to his family, then deal with the emotional trauma. There is a beautiful scene in Episode 506 where Danny confides in McGarrett, blaming himself for his brother’s murder. And later in the season, an episode devoted entirely to the aftermath of the incident in Colombia.” Check’s in the mail, Lenkov!

Question: I heard a rumor that based on clues in the first two episodes of American Horror Story: Freak Show that Season 5 may have an abduction/alien/outer space theme. The only clues I’ve been able to find to support that so far are the setting of Freak Show — Jupiter, FL — and the fact that Elsa sang “Life on Mars.” —ABZ
Ausiello: Hmm…. sounds like a reasonable theory to me!