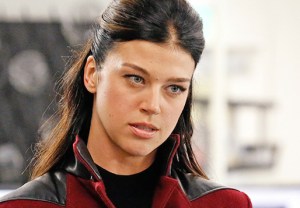 That was an episode of television.

ABC’s Marvel’s Agents of S.H.I.E.L.D. this Tuesday unleashed Bobbi Morse, raised more questions about Skye’s 0-8-4 status and served up a reunion that was weeks (and yet so long) in the making.

The eventful hour ended with The Doctor (aka Skye’s father) — who was revealed to be a hair-trigger psychopath capable of brute strength — forming an alliance with Daniel Whitehall, given their shared interest in the Obelisk/Diviner. The Doc’s prescription: To kill Coulson, “along with, you know, everyone else.”

After screening the episode this weekend for a lucky bunch at the New York City Paley Center’s PaleyFest (and then conducting a Q&A with Clark Gregg, Ming-Na Wen, Chloe Bennet and EP/Marvel TV head Jeph Loeb), I invited Loeb to field a few burning questions coming out of “A Hen In the Wolf House.” Here’s what he shared.

IS BOBBI MORSE (PLAYED BY ADRIANNE PALICKI) IN FACT A KEEPER? | After breaking her cover as HYDRA’s security chief to save Simmons’ bacon (and with style), the batons-wielding badass was welcomed onto the bus with (most) arms wide open. “She will be with us for a little bit,” Loeb affirms. “I can’t tell you where she’s headed, but as you can see, there are some people who aren’t very happy that she’s there, and some who are.” Falling into the former group, of course, is Lance Hunter, who has referred to his ex as a “hellbeast,” “she-devil” and other unkind terms. So what exactly transpired in the past, to elicit such friction? “They have some ‘splaining to do,” Loeb smiles.

IS SIMMONS’ RETURN THE CURE FOR WHAT AILS FITZ? | Or could having her back be the catalyst for a setback? “It’s certainly a catalyst for complication,” Loeb says. 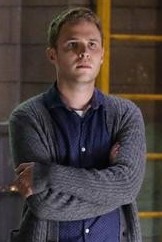 “The reasons why she left and what it’s done to their relationship, all those things are yet to be discovered, but it will be great fun to do so.” Because remember, Fitz was just starting to open up/warm up to the new team members. “Fitz had made a decision, which was to move on, and he’s really been trying to find friendships with Mac and Hunter,” Loeb notes. “We’ll see what happens now that Simmons is back.”

IS COULSON CORRECT, THAT SKYE MIGHT BE AN ALIEN? | Seeing as little miss 0-8-4, unlike Coulson or Garrett, never scrawled odd symbols (a map, perhaps?) as a reaction to the extraterrestrial-based GH formula? “All we know about 0-8-4s is that they are ‘objects of unknown origin.’ It doesn’t [necessarily] mean that they are of alien nature,” Loeb reminds. “As Coulson says, ‘It’s a theory,’ so we’ll see how it goes.”

WILL MAY HAVE TO PUT COULSON ‘DOWN’? | Now that she has (very) begrudgingly agreed to “the plan,” to end his misery if the GH side effects become too much? Or, as TVLine reader Susan wrote in: “Will we see Coulson in a better or worse place before the midseason break?” Loeb’s answer to that was, “It’s fair to say that it will be resolved — soon — but whether or not that’s good or bad, we will see.”

WILL WARD EVER GET OUT OF HIS CELL? | If, for example, the valuable intel he has to offer his former team necessitates him being hands-on with Skye, May et al, in the field? Loeb very much talked around this one, echoing the mantra, “If you have a monster in the basement, that’s not a good idea. When and if [he’ll be let out] is still [for viewers] to find out, but it’s a very dangerous thing to have him where he is!”

What did you think of “A Hen in the Wolf House”?