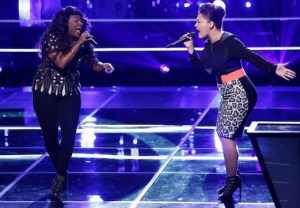 Pop quiz time! What is the probability that tonight’s episode of The Voice ended in a Steal?

a. 100%
b. Absolute certainty
c. Is Adam’s torso covered in tattoos?
d. “Uh-HUH, this their s–t. All the girls stomp your feet like this.“

No, you are not allowed to shake a fist at my spoiler-ization down in the comments section. The Voice‘s Battle Rounds always end in a Steal, sillies!

But as much as I try to keep NBC’s reality singing competition at an emotional arm’s length during its early rounds — at least three-quarters of the time, potential champions get pitted against each other in winner-take-all pairings, while subpar competitors somehow get salvaged from the scrap heap by sentimental coaches, after all — once in a while, something so spectacular happens that my Gospel hand goes up and those walls I built, baby, they come tumbling down.

Tonight, that rare double rainbow-striped pegasus-unicorn hybrid landed on NBC’s Monday-night schedule in the form of DaNica Shirey and Toia Jones’ duet on Beyoncé’s “Halo.” Sure, the holleration started at a 10 and got cranked up to “Michelle, can you handle this?” — but you won’t hear any complaining from me. In DaNica and Toia, The Voice has managed to shine a massive spotlight on two soulful, distinctive divas who have somehow failed to make a blip on the major-label heirarchy, toiling away in anonymity while Britney Spears makes seven figures for gasping to a backing track six nights a week in Vegas. Heck, more people have heard Kim Kardashian sing than both DaNica and Toia combined prior to The Voice‘s seventh season.

So, whether or not their big, belt-y styles suit your tastes, let’s be happy they’ve found a forum — however brief — along with the dozens of other wonderful talents who’ve graced the stage in Season 7. I might not understand every move Blake and Adam and Gwen and Pharrell make, but even when they reward lesser constellations and ignore the shining suns in front of ’em, The Voice is doing its part to right musical disparities in the universe. That it does it with a big dollop of predictability is the least of my worries.

On that note, let’s get to the very challenging business of ranking tonight’s Battles in order from least- to most-promising winner.

6. Team Gwen: Ryan Sill defeats Jessie Pitts on Ellie Goulding’s “I Need Your Love” (Jessie stolen by Blake) | “I’ll take ‘None of the Above’ for $100, Alex!” OK, sorry, I’m being mean, but while Ryan hits most of his notes, there’s a blandness to his tone and delivery that makes him as exciting as an unembellished slice of Wonder Bread. Jesslie’s precious affectations and wheezy phrasing, on the other hand, made Ryan the clear winner — which made Blake’s use of the Steal all the more vexing (’til I remembered how he often likes to steal cannon-fodder to fall at the feet of his Chosen Team Members).

5. Team Pharrell: Katriz Trinidad defeats Blessing Offor on Stevie Wonder’s “Do I Do” (Blessing stolen by Adam) | The night’s other shoulder-shrug of a battle found Katriz checking off her notes like an overenthusiastic high-school student filling out her SAT exam with a No. 2 pencil rather than emoting with the kind of soul and spunk that will probably evade her for another five years. I mean, she’s clearly talented, but right now, that talent should be figuring itself out in a high-school auditorium. Blessing, for his part, started off with a series of sharp notes and then slathered on so much vocal frosting to cover his errors that it was almost unbearable. Again, how he scored a Steal while Ethan Butler got sent to the guillotine is a mystery worthy of True Detective. (Actually, I’d watch a limited-run series with Woody Harrelson and Matthew McConaughey try to crack that case! I’m not alone here, right?)

4. Team Adam: Damien defeats Kelli Douglas on Eddie Floyd’s “Knock on Wood” | Kelli’s stage fright bubbled up from her core and right through her pores like air bubbles in a living-room fish tank — opening the door to an easy win by the explosive, emotive, though not entirely memorable Damien. If he can tap more into the stuttery “ah-ah” ad-libs that Pharrell so excitedly mimicked, he might stand a shot in the public voting rounds — but Adam will need to give him more current, relevant material if he opes to still be on TV screens come Thanksgiving time.

3. Team Adam: Matt McAndrew defeats Ethan Butler on Coldplay’s “Yellow” | I know folks seem to love the tone of Matt’s voice, but to my ears, he overplays the “sensitive” quaver of his voice to the point where it’s occasionally distracting. And while Matt’s willingness to stick to Coldplay’s outline made him an undeniable winner against Ethan’s rock-solid but with one-embellishment-too-many approach, I fear the coaches are pushing the bespectacled indie rocker so aggressively so early that he may find it impossible to match the hype.

2. Team Blake: Taylor Brashears defeats Bree Fondacaro on Linda Ronstadt’s “You’re No Good” | Poor Bree! She sounded pretty decent in rehearsal, but when she finally took to the stage, her attempt to take La Ronstadt’s melody a little off the beaten path resulted in her getting lost in the deep woods with no rescue party in sight. I mean, if it weren’t for the Voice band jamming out behind Bree, I’m not sure I’d have ever figured out what verse she was actually attempting (and I know my Ronsdadt catalogue, folks!). Taylor, meanwhile, wasn’t spotless, either, but she most definitely nailed the mix of smoky chanteuse and woman scorned that Blake asked for (and that the song requires). Not only that, but Taylor’s wicked upper register makes me wonder if there’s a lot more iceberg waiting to be uncovered in the coming weeks.

1. Team Pharrell: DaNica Shirey defeats Toia Jones on Beyoncé’s “Halo” (Toia stolen by Adam) | Like I said above, DaNica and Toia went at “Halo” like a pair of cheetahs attempting to abscond with the last impala leg. The sheer volume of the entire, epic Battle made my wine glass vibrate, and the emotional intensity behind the words came thisclose to making me Gwen’s misty-eyed double. Personally, I thought Toia’s gruff-belter style fit “Halo” a little more snugly than DaNica’s octave-scaling runs, but I can’t fault anybody who’d have voted DaNica over Toia, for that matter. I’m just glad that Pharrell’s silly decision to put two of his best singers in the ring together didn’t backfire in one of their hasty exits. Still, though, imagine how much less stressful the night would’ve been had DaNica gone against Katriz and Toia against Katriz?

Anyhow, on that note, it’s your turn. What did you think of Monday’s Battle Rounds? Take our poll below, then sound off in the comments!