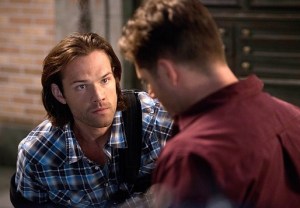 Now that Sam has demon Dean in his grasp on Supernatural, prepare for a “pretty brutal” confrontation between the brothers as a war of words — and then some — are exchanged in Tuesday’s episode (The CW, 9/8c), showrunner Jeremy Carver warns.

The hour presents “a Dean that we haven’t seen before,” executive producer Robert Singer adds. “Over the first three episodes, he gets to the point where Sam has to try to really pull him back from an edge that he probably hasn’t been on before. How he does it or if he does it…”

Well, that’s a mystery that remains to be answered — or not. “The cure does happen,” star Jensen Ackles reveals, “but it doesn’t solve the problem of the Mark of Cain. There’s still an ugly head that’s waiting to be reared. When that happens is waiting to be seen.”

Even after Dean is rid of his inner beast, “the echo” of what’s happened to both Winchesters over the last couple of months remains, his co-star Jared Padalecki shares. Among the questions being explored are, “What are the residual effects of Dean having become a demon and of the Mark of Cain that’s on Dean’s arm?” he explains. “And what is the residual effect of Sam having to make amends with what he did as a human in order to track down Dean and to save him?”

But first, Castiel will finally interact with Dean’s demonic side in this week’s outing. “It’s a pretty strenuous meeting,” Ackles previews. “Dean is still not quite Dean, and Cas is having to, unfortunately, use some powers he would rather not have to use against Dean.” 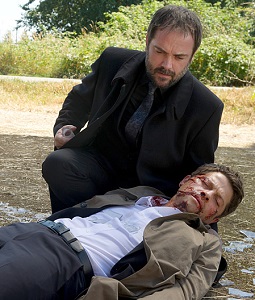 Even though the angel is facing his own problems and is low on grace, “Castiel is hellbent on ridding Dean of his demon and willing to do anything, no holds barred, to make sure he’s no longer a demon,” Misha Collins says, adding that their face-to-face is “a little touchy.”

Meanwhile, an unlikely partnership forms when Crowley seeks out Castiel’s help after he realizes his former BFF’s antics are causing problems for him in Hell. “Once again, Castiel is, generally speaking, reluctant to partner with Crowley and vice versa, but I think that we end up finding some compatible goals to go after,” Collins teases.

And how is Crowley surviving without his pal Dean? “It’s going to be a continued storyline throughout the season,” Carver replies. “Their relationship is complex.”

But not as complex as the task handed to Ackles when it came time to step behind the camera for the fourth time and pit Sam versus Dean.

“Not only was it tricky to portray because we actually shot” Episode 3 of Season 10 prior to Episodes 1 and 2, the actor shares. “But I directed it. So that was another double whammy on me, a.) you’re going to direct the first one – that’s always challenging – [and] b.) you’re going to have to be three episodes into a character you’ve never played before. Go! I hope that the audience receives it. I’m far too close to this episode than I normally am to most episodes.”