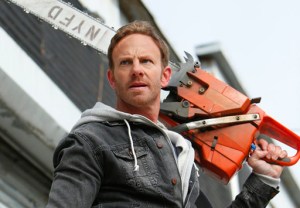 Sharknado 3 next summer will touch down on not just one city but several, as the shlockfest’s second sequel takes on “the Feast Coast,” it was announced on Monday.

Or, will Daniel Radcliffe’s “dream” to appear in a Sharknado movie be realized if the toothy twisters actually target The Wizarding World of Harry Potter at — corporate synergy alert! — Universal Studios, Orlando?

Just as pressing a question: If it took, what, a road flare taped to a freon tank to neutralize Sharknado 2, what could possibly tame an entire string of sharknadoes crawling a coastline?! We’re gonna need a gross of M-80s and some chewing gum, my inner MacGyver tells me.

Sharknado 2: The Second One this past July sucked 3.9 million total viewers into its vortex — making it Syfy’s most watched original movie ever — with 1.6 mil landing in the 18-49 demo, up 180 percent versus the original telepic.

Meanwhile, so much for Tara Reid’s wish to next hit a world-famous party beach. For work, at least:
http://youtu.be/mY7RPCwlfrY