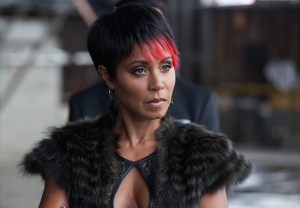 This week on Fox’s Gotham, Jim Gordon’s non-murderous secret got out, Fish Mooney’s plan for her comely chanteuse became evident and Master Bruce did some nifty detective work.

On the heels of what I felt was a stronger episode, “Arkham,” this week’s hour felt flat to me. And I’m starting to ask myself why this show isn’t quite clicking for me, several weeks in.

Sure, we had some plot movement. In a bid to cement a bigger role with Maroni, Penguin came clean about his real name and criminal roots in the Fish via Falcone organization. That reveal got Penguin handed a beating, until Jim Gordon was “asked” to come to Maroni’s restaurant and vet the story, of how he faked fulfilling a hit for Fish/Falcone. But now Maroni has leverage on Jim, and hinted at plans to avail himself of it in the future.

We also got a bit better context for the dynamic/mood within the larger Falcone organization, when he held a meeting of the families to assure them the Arkham deal benefits everyone, that Maroni didn’t “win.” One boss, Nikolai, doesn’t seem satisfied, and though Fish gives the Russki a verbal lashing then and there, we later see her giving him an all together different one. Yes, they’re in bed with each other, for the mutual good of felling Falcone (though she likely endeavors to do so alone).

To that end, we see Fish curiously grooming Liza to talk, sing and carry herself a certain way. And at episode’s end, we learn why — to bait and bewitch Falcone, as some enchanting, aria-loving version of his mother at that age. Downright Oedipal!

The Villain of the Week… sigh, yet another low-charisma shlub, one who concocted an epigenetic drug that converts bone calcium into super-strength, only to soon after result in death. (Update: TVLine reader Kalbosh reminds us that Venom is the super-steroid that one day will empower Bane.) But the larger raison d’etre here is to cast another shadow on Wayne Enterprises, whose chem division the guy once worked for, until he took umbrage with their plan to design chemical weapons. Wayne Enterprises’ sketchy dealings were a recurring theme, as Bruce’s hours upon hours with his nose buried in the company books revealed to him “discrepancies” with how exactly the Arkham deal went down, that his parents’ company was in cahoots with mobsters. This is a bone Bruce is obviously not going to let go of, and after a scare at the hand of the villain, even Alfred is on board with the “investigation” — though Bruce’s innocent inquiry to meet with the board has raised the hackles of one misleadingly innocuous middle manager.

What did you think of this week’s episode, “Viper”? Are you still tuning in? If so, why? If not, why not?