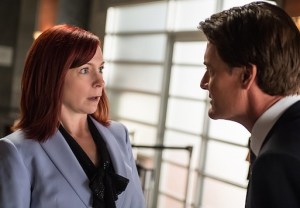 Penguins are descending on Sunday’s installment of The Good Wife (9/8c on CBS) — and some of ’em might be wearing top hats.

Fret not: The adorable, flightless birds aren’t part of some Ill-Conceived Animated Episode, promises guest star Carrie Preston, who’s reprising her role as the eccentric (and beloved) Elsbeth Tascioni for a two-episode arc.

“You’re going to get a glimpse into some of the things that go through Elsbeth’s mind on her way to making her revelations — and maybe those will involve some penguins,” says the actress, who took home the 2013 Emmy for Outstanding Guest Actress in a Drama Series for her Good Wife role.

Of course, as much as Elsbeth’s “very mercurial mind” allows her to win cases by unorthodox and unexpected means, it can also be a stumbling block. “She often gets seduced by her next thought or by anything attractive or interesting or exciting that might be standing in front of her,” Preston explains. “And you’re going to see some of that happening.”

“These are two strong women — each with her own arsenal of tools to use in the courtroom,” Preston observes. “It’s fun to see both of their different methods as they face off against each other — especially because this season, Alicia’s character is so powerful and rather formidable.” 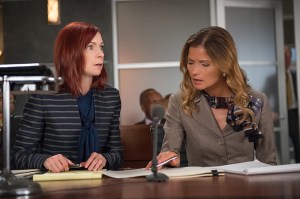 Not to say that Elsbeth doesn’t possess those qualities herself. But when pressed on the subject of whether her character accentuates her eccentricities as a means of throwing her opponents off balance, Preston has a hard time deciding. “What’s great is that we don’t know [Elsbeth’s intent]. That’s a mystery and it makes her exciting to watch,” explains the actress. “We’re not sure if she’s manipulating people or if she’s actually that way. As an actor, I play the truth of the moment no matter what I’m given, so I’m definitely not playing her as a manipulative Machiavellian kind of character.”

Elsbeth won’t be the only enigmatic attorney in the Cook County courthouse during “Shiny Objects,” as Kyle MacLachlan’s Josh Perotti will also figure into this week’s trial — and prove a distraction for his occasional sparring/flirting partner.

“Elsbeth wishes she wasn’t attracted to him — but she is,” says Preston. “It’s fun to have that tension going on inside of her mind — and then the tension that goes on between them. They square off and they’ve met their matches in each other. They have a lot of similarities in the way they go about the world; they operate in the same universe.”

Capturing the Tascioni speaking cadence and off-kilter delivery requires a lot of preparation, says Preston. “Elsbeth is a very quicksilver person — and I like to map out her thought processes,” she explains. “At the same time, I love the collaborative process with the other actors and the director and the writers, so I don’t make decisions that are hard and fast and true before I get there. It’s about having an idea of what I’m going to do, but really trusting that all the other elements are going to give me a sense of freedom and play. That’s the fun of Elsbeth: She surprises even me. I surprise myself.”

But does Preston think her Season 6 work might put her in the Emmy race again next year? “I would never presume to answer that question in the affirmative,” she answers with a hearty laugh. “But I’m very pleased with what they gave me and excited to be back. I’ll come whenever they call.”