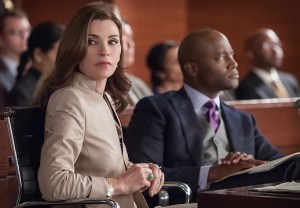 And you thought the clowns from American Horror Story: Freak Show were scary? How about the ones haunting the mind of The Good Wife‘s Elsbeth Tascioni?

OK, maybe they’re not exactly haunting her, but some of ’em are darn sure trying to stop her from coming up with a solid defense strategy for her corporate client in a gender discrimination lawsuit by a fired CEO.

“Shiny Objects,” as the hour is titled, pits Elsbeth and partner Rayna Hecht against Florrick-Agos’ Alicia and Dean — and provides an altogether less stressful and significantly more self-contained viewing experience than the quartet of Season 6 episodes that preceded it. (Anything where Cary isn’t at risk of being shanked in a jail cell, frankly, is the equivalent of a spa day this season, no?)

This isn’t to say we don’t get further advancement of the “Alicia for State’s Attorney,” “Kalinda/Cary” and “Florrick-Agos ‘Rustic’ Office Space” story arcs. In fact, Peter and Alicia’s literal backroom battle represents their most significant interaction since her immediate mourning of Will Gardner’s death — and damn, Julianna Margulies and Chris Noth bring excessive amounts of poison to their delivery. But just like Elsbeth’s bedroom wallpaper — for a minute, I thought her treadmill was in a nursery! Was it just me? — the action is more pretty pastel than dark and bubbling and emanating toxicity.

Let’s jump right to the major action — and the major questions raised over the course of the hour, shall we? 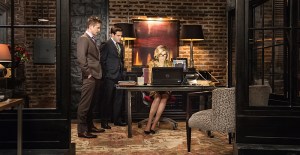 THE FLORRICK-AGOS HOSTAGE CRISIS OF 2014 | The week’s intermittently funny and terrifying through-line begins with Diane innocently opening an email from Alicia with the message, “Your files have been encrypted: Click here to access.” Turns out it’s some kind of ransom malware that’s essentially holding hostage all of the fledgling law firm’s files — and if they don’t pony up $50,000 in 72 hours, everything will be deleted. The partners decide they have no choice but to pay up — but things take a painful turn when Diane’s computer auto-fills her info, and the password to freedom gets sent to her old Lockhart-Gardner email address. David Lee, practically rubbing his hands together like an old-timey villain, wants Diane to grovel, and threatens to tear up the information she needs. (“Go ahead, David: It’s a copy of an email — the paper doesn’t matter,” purrs La Lockhart, deliciously in control even with her entire business on the ropes.) Finally, David proposes a trade: He’ll hand over the email, but he’ll need Diane to sign over her control of the lease that allows Lockhart-Gardner to utilize the 27th and 28th floors where they’re currently housed. Whoops! Talk about showing your hand! Diane realizes she’s got leverage in her relationship and nixes the deal. Meanwhile, Kalinda (with an assist from FBI agent and occasional lover Lana) manages to turn the tables on the Russian blackmailer by uploading “Free Pussy Riot” and “Go to Hell, Putin” imagery onto his computer. The ransom standoff neutralized — and a giant cockroach in Diane’s filing cabinet — and suddenly there’s talk of trying to wrestle control of LG’s office space. I mean, the exposed brick at Florrick-Agos is to die for, yes, but the transient homeless guy showering in the bathroom, the lack of doors on conference rooms and the perpetual drip from overhead pipes kind of cancels out the rustic charm, no? Should be interesting to watch Lee and Canning’s heads explode if Diane follows through on her brainstorm. Oh who are we kidding, she’s soooo going to follow through.

Side note: Best line of the week has to be Eli observing the ransom clocks on the Florrick-Agos screens, and wondering, “Why are all the computers here counting down? I feel like I’m in a Bruckheimer film.”

KALINDA EXPLORES HER OPTIONS | Don’t say Robert and Michelle King aren’t satisfying our inner pervs this season. Cary and Kalinda are midway through their foreplay when the call comes in from Florrick-Agos about the malware situation. Kalinda tracks down Lana for help, but the federal agent takes it personally that Kalinda only comes calling when she needs something. “I don’t like it either,” coos Ms. Sharma. “Then stop it,” says Lana, as the temperature in the room rises by seven or eight degrees.

Cary spots Kalinda on the elevator with Lana and pretty much surmises they’ve purchased non-refundable tickets to the isle of Lesbos — and sure enough, the gals get their sexy on, on more than one occasion. It’s just that when Lana attempts a serious conversation about coming out to her mother just a month before her death, Kalinda throws a flag on the sheets. “I can’t do this,” she admits. Later, when Kalinda thinks it was Lana who turned the feds on to a case involving Florrick-Agos’ big client, she gets super turned-on: Ultimately, it seems like she prefers dangerous games to deep, meaningful connections. Lana, exhausted, makes her exit: “Just because you would do it, Kalinda, doesn’t mean I would.” The bigger question, though, is whether Cary was expecting any kind of exclusivity from Kalinda, or if her side dalliances are the kind of thing he’ll gladly overlook. I mean, Kalinda in a leather skirt is kind of a tough proposition to turn down — especially since his plate is pretty full with his case load + trying to stay out of jail.

A MARRIAGE OF INCONVENIENCE? The week’s juiciest side plot finds Finn agreeing to introduce Alicia’s first major speech — which gets complicated when Peter agrees to take on the task, in exchange for her brushing Finn off the lineup. It’ll be “the beginning of a long line of distasteful acts,” admits Alicia’s campaign managr, Jonny Elfman. But after drinks at the ADA bar with Finn — did Candidate Florrick order straight tequila? Oh yes she did! — she realizes she can’t, or doesn’t want to, dismiss her pal/possible flirting partner. This leads to a delectable battle with Peter — one that makes Eli and Jonny promptly sprint for the nearest exit. When Peter huffs that Alicia wants a political favor, she reminds him of everything she’s sacrificed publicly for his aspirations. “You go off banging prostitutes two at a time — and I stood beside you like a grinning fool,” she seethes. “For God’s sakes, let it go!” he screams back, maybe forgetting the sins of his past are barely a half-decade old. Alica, though she’s the political newbie, has the bigger stick in her arsenal: “Your favorables will plummet through the floor,” she hisses, when Peter threatens to bail on her campaign announcement. “On the day you want to be talking about pensions, every question will be about the state of your marriage. Yes, I need you, Peter, but you sure as hell need me, too.” It looks like Peter’s willing to go down with Alicia’s campaign ship as she strides to the podium, but whaddaya know, he sweeps in at the last possible second and gives her the introduction she deserves and he, frankly, needs. And then, sweetening the deal, the Governor stands on stage behind her as she begins to speak — ensuring every major news outlet runs a split screen from 2009 (when Alicia first stood behind Peter during his political scandal) and 2014 (with the Phoenix not just rising from the ashes, but flying triumphantly toward her own destiny).

THE CASE OF THE WEEK | Alicia and Dean take on the case of an Internet CEO fired two weeks before her options vested — on account of her being a “bitch on wheels” (Alicia’s private description, not mine). Rayna is on the defense team — until Elsbeth gets a flash of inspiration inside her candy-coated, sometimes macabre mind palace that includes the music of the xylophone and the pan flute, ham sandwiches, wicked witches, a multitude of clowns and train conductors who deliver to her brilliant defense strategies. (The CEO’s cellphone was broken — and her schedule included notations from five subsequent assistants: Maybe it wasn’t sexism, but just hellacious management, Elsbeth concludes.)

Alicia, though, knowing the beautiful mind she’s up against, lines her plaintiff’s table with pamphlets about feeding South African Penguins and the pleasures of Ocean Liner Adventures — using Elsbeth’s weapons against her and distracting the eccentric redhead right in the middle of cross-examination. As the momentum pings back and forth, back and forth, like a Federer-Nadal match, U.S. Attorney Josh Perotti (Kyle MacLachlan) halts the proceedings by bringing a claim of corporate espionage and theft of trade secrets against the defendant. And if he prevails, there won’t be a penny for Alicia and Dean’s client to collect. Looks like the opposing sides will all be working together as a happy family next week — a settlement means neither Alicia or Elsbeth has to lose, huzzah! — whether they wanted to or not.

What did you think of this week’s Good Wife? Whose side did you take in the Peter-Alicia battle? How surprised (or not) were you by what goes on in Elsbeth’s mind? And should Cary break it off with Kalinda — or is he getting exactly what he signed up for? Sound off in the comments!