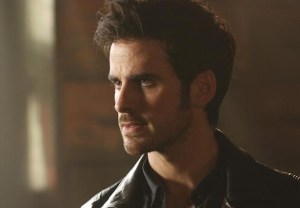 This Sunday on ABC’s Once Upon a Time, Hook had a great date with Emma, but the “morning after” — with Rumplestiltskin — really did a number on the buccaneer.

IN THE FAIRYTALE LAND THAT WAS…. | “Joan” finds Rumplestiltskin, but he knows who she really is — Anna of Arendelle, out to find out why her parents traveled to Mist Haven. “I’ll do whatever it takes,” she says — music to the dealmaker’s ears. Rumple tasks Anna with doping the tea of an old man down the lane. But when Anna meets the kindly gent, she can’t do it. She later learns that what she had was the antidote to a poison Rumple had given the man the day prior — and without it, he has now turned into a (Mickey?) mouse, thus removing the first line of defense protecting the Sorcerer’s Hat in his cellar. But only someone who has been tempted by inner darkness and turned away can access the hat, so when Rumple makes Anna even for just an instant think of driving a sword through him — lest she be locked in his tower for eternity — her resulting tear of desperation suffices.

Ah, but when Rumple returns from the cellar with the hat’s container, gushing about how it will make him unstoppable, the mouse (aka The Sorcerer’s Apprentice) bites his hand, and Anna grabs the Dark One’s dropped dagger. Quickly realizing that she can now command Rumple, she orders him to A) send her back to Arendelle, B) turn the mouse back into a man and C) never hurt her or Elsa. (That last bit is a good thing to know!) We last see Anna reuniting with Kristoff, loath to tell Elsa that their parents feared her so much, they were out to get her magic removed forever.

IN STORYBROOKE…. | With Henry’s half-hearted blessing, Emma asks Hook out on a date, effectively ruining his darts aim. After he accepts, he pays Rumple a visit, to ask for his left hand back. Rumple warns, “There’s no telling what influence it will have on you,” having last belonged to Hook’s much more pirate-y self, but Hook scoffs. Hook then arrives to pick up bee-a-youuu-ti-ful Emma (much to the delight of Mary Margaret and her Polaroid camera) and show off his new/old hand (not much to the delight of over-protective dad David). Killian takes Emma to an Italian restaurant, where we spy a couple evoking Lady and the Tramp‘s spaghetti scene. He aspires to live up to Emma’s previous date, with a man who proposed before turning unto a flying monkey. But when Will Scarlett knocks a drink on Emma, Hook overreacts, grabbing the thief with his out-of-control left hand.

Hook’s wariness of his “bad” hand even distracts him (a bit) from his and Emma’s good night kiss! Emma, who really needs to get her own place, is met inside the door by her waiting-up parents, while Hook again goes overboard when stopping Will from breaking into the library. Hook finds Rumple and demands back his hook, but Rumple says 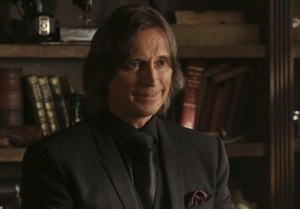 the pirate no longer has leverage, that he returned the real dagger to Belle. No, if Hook wants a take-back, he must meet Rumple the next morning at the dock — and when he does, Rumple has a Fantasia-like anthropomorphic broom lead them to where the Sorcerer’s Apprentice now lives. There, Hook holds down the old man as Rumple reveals he again has possession of the hat, which he uses to make the apprentice vanish.

When Hook later reclaims his hook, Rumple makes clear that the pirate will owe him for as long as he lives — lest Rumple show Emma a videotape of Hook accosting the old man. Oh, and he suggests that the hand was never “cursed,” but merely an invitation for Hook to remember the darkness that lies beneath, as a pirate and not a lovestruck “puppy dog.”

Elsewhere: Regina grew frustrated with her inability to unfreeze Marian, prompting Henry to suggest that as part of Operation Mongoose, he will go “undercover” at Gold’s shop, suspecting that Rumple somehow got his own story “rewritten.” Playing the “grandfather” card, Henry scores a job as Gold’s “apprentice,” where he immediately begins sweeping really, really badly…. Emma tells jailed Will that he was found in the library with a copy of Alice in Wonderland, and a picture of the Red Queen in his pocket…. And census records reveal that “Sarah Fisher” aka the Snow Queen did not come over in any curse, raising the questions: How was she in Storybrooke? And what does she want with Emma?

NOTABLE QUOTABLES | “I don’t pillage and plunder on the first date”…. “Oh I see, blackmail brings out the romantic in you”…. “Is that just the corset? Wheres the rest of it?”…. “So what do I call you now? ‘Captain Hand’?”…. “You want to come in and have coffee with my parents, a newborn and a human ice maker?

What did you think of this week’s Once Upon a Time? Curious to see Hook now do the Dark One’s bidding? Enjoy the Will Scarlett/Anastasia tease?