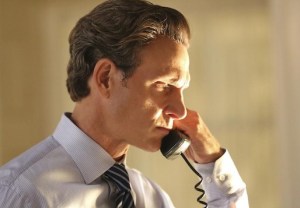 That, folks, was Season 2 Scandal levels of scandalaciousness.

I said here last week that the show seemed to be building momentum, to be about “something” as it is during its most entertaining, can’t-look-away times. And this week’s episode, which featured a provocative First Family drama, reignited the “Olitz” spark, gave us a Full Throttle Olivia Pope and, for good measure, dropped a humdinger of a final twist, was operating at high velocity.

FIRST (OR WORST?) DAUGHTER | One of the show’s most torrid scandals ever revolved around First Daughter Karen, who slipped her Secret Service detail to scamper off to a house party 500 miles away from school, where she drank, toked, shot up “something wonderful” and enagaged in a sex act with not one but two strangers — caught on video, natch. Huck does some damage control by (somehow) powering down all the cell phones at the party (OK….), so that Karen can be spirited away unseen. Then, after Karen narrows the field of possible “costars” to one (during a musical montage I felt was just this side of being “flip”), Quinn finds and monologues the boy, Bobby, into submission, ’til he coughs up his tag-team partner Tripp’s name.

Olivia meets with Tripp Morgan’s parents, who are eager to nip this scandal in the bud — in trade for $2.5 million. After all, they reckon, a sex tape starring the First Daughter has to be worth “a lot.” Apprised by Olivia of the shake-down, Fitz scoffs, before throwing himself a pity party. “I’m a failure as father, we can agree I’m a failure as a husband….” But how about as a man? Fitz pulls Olivia in close, beseeching her to “never leave me like that again,” as she did for two months, “alone.” “I almost died without you,” he says, alluding to the suicide attempt hinted at a few weeks ago. “Didn’t you miss me? Even a little?” he asks. “Oh, I did,” Liv admits, but before things get too hot/round third base, Olivia steps away, to confess: “I didn’t go away alone,” that it was Jake at her side. “So,…” Fitz laments. “I’m failing as a father, a husband and as a man.”

Unless, maybe, he can effectively eliminate the competition? More on that in a bit.

Liv goes back to the Morgans to accept their price, only to get pumped for another half-mil, lest the world see Karen for the “dirty little slut” she is. Big mistake, folks. Huge. Olivia launches into an oration of epic proportions, chastising them for preying on the Grants, who already have lost a son. Then she digs her Louboutins into the mud and details her plan to destroy the Morgans in the press, painting them as child pornographers who sent their son to have sex with the First Daughter. That seems to dial down their upcharge.

EVERYTHING’S JAKE | Fitz’s family-related drama doesn’t end there, however. In post morteming the security lapse that allowed Karen to frolic her brains out, it is discovered that Secret Service agent Tom has a time card discrepancy, one placing him two days before the election at Fort Detrick — on video, apparently stealing a strain of bacterial meningitis. The Inspector General kicks off the interrogation of Tom, only to get replaced by Rowan — at Fitz’s doing. And though Tom just moments ago had allied with Jake to throw Rowan under the bus for Jerry Jr.’s murder, when pressed (and pressed) by Rowan, the person whose orders he says he was following is… Jake. Jake Ballard. Fitz then gives Cyrus a nod, and next we see Jake outside the Oval Office — where he tried but failed to confront Fitz with evidence of Rowan’s scheme — be surrounded by Secret Service agents and led away… to where?

And why did Tom implicate Jake, of all people? What/whose script was he following? UPDATE: OK, it hit me — when POTUS failed to respond to Tom’s beckoning, Tom figured Jake didn’t get to him with the evidence/was lying about doing his part, so Tom felt betrayed/fingered Jake. UPDATE: Get fresh scoop from “Tom” himself!

A few other key scenes not to be overlooked:

* Having barely dodged a car bomb in the cold open, Jake asks David to release the B613 files should anything happen to him. When David declines to lob that wrecking ball at decades of democracy, Jake pins down the AG and threatens to snap his neck.

* Fitz had tried to keep Mellie out of the loop regarding Karen, but the truth comes out after the First Lady spies Olivia in the White House. After Mellie contends that it is her job to clean up after her kids, not Olivia Pope’s, Fitz effectively counters with the argument that ever since Jerry died, she has “mothered no one.” That he may have put up with “drunk Mellie, smelly Mellie, ‘Screw everything to hell’ Mellie and ‘Eat everything that’s not nailed down’ Mellie,” but he’s not about to be lectured by the likes of her now. Mellie attempts to have the last word, snarking about the sexy tape sitch, “She takes after her daddy then, doesn’t she?” but in my opinion, Fitz won that fight.

* Later, Mellie has a brief heart-to-heart with Karen (during which I felt the recast didn’t best serve the storyline; Mary Mouser reads just too young and not in a good way). The moral, as sexist as it is, Mellie laments, is that Karen’s “knees have to stay together.” The scene closes with a too-brief moment where Karen asks, “Mom, are you OK?” — hinting at her awareness of Mellie’s downward spiral, but beyond Bellamy Young’s moved reaction, I would have liked to see that conversation continue.

What did you think of this week’s episode? How will Jake get himself out of this one, since the agents took his packet of evidence? Is he the victim of a Presidential Frame Job?