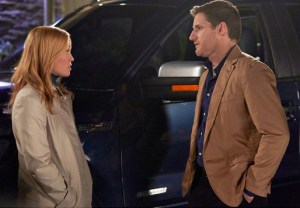 Parenthood‘s Joel and Julia have the kind of relationship Taylor Swift songs are made of.

A trip to Sydney’s classmate’s house on Thursday — you know, to make her apologize for being a tiny terror — led to the conversation no fan of the show, or fan of true love for that matter, ever wanted to hear: “We need to tell them we’re not getting back together.”

In the end, though, Julia couldn’t bring herself to say those words — or anything close to those words — to their kids. Instead, she told Sydney that the future is uncertain, then said it’s OK if she’s mad at her parents for putting her in this situation. (Side note: I get that she blames herself, but isn’t it a little weird that we didn’t see Julia scold Sydney for her bullying this week? Is she just going to get a free pass?)

OPERATION: ZEEK | Here’s a twist no one could have predicted: Zeek is not adjusting well to life after his heart surgery. He spent most of the hour huffing and puffing and making Camille miserable, and it seemed like no Braverman — not even baby Aida, sans Crosby’s nose — could pull him out of his funk. That’s when Kristina, like a majestic angel from above, took him by the hand and showed him the way. “You don’t have to pretend to be stronger than you feel,” she told him. “But you have to try to get better.” 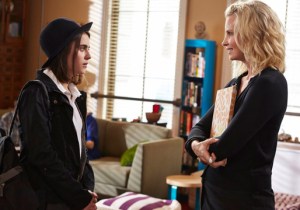 MAX’S GIRL | It’s not easy making friends in a new school… especially when your instinct is to refer to the other kids, not by their names, but by their placement on the autism spectrum. Yet that’s exactly how  Max and Dylan began their tragic love story, much to the displeasure of Kristina, who tried to explain to Dylan why you have to treat people with respect. But like the great REO Speedwagon before him, Max just can’t seem to fight his feelings for Dylan, which led him to ask Adam for relationship advice. (Why do I have the feeling this is going to end in disaster?)

HANKY IN THE MIDDLE | Now, let’s take a trip over to that alternate universe where beautiful women fight for Ray Romano’s hand: After catching a pants-less Sarah sneaking out of Hank’s bedroom, Sandy re-iterated her desire for Sarah not to be a part of Ruby’s life, forcing Hank to man up and defend his lady. “We’re not just dating,” he explained to Sandy during the kind of tense breakfast only Parenthood can provide. “We’re not just sleeping together. We’re serious.” Much as she tried to hide it, the hurt in Sandy’s eyes was clear as she ultimately conceded and gave Hank the OK let Sarah and Ruby mingle. (And thank God she did, otherwise we wouldn’t have been blessed with Sarah and Ruby’s Forever 21/Sometimes 40 exchange.)

ROME IF YOU WANT TO | Confession may be good for the soul, but it’s pretty much the worst thing for Crosby’s inner-biker. Telling Jasmine about last week’s accident resulted in an immediate — not to mention strictly enforced — no-motorcycle rule, forcing Crosby to track down Oliver Rome in the family minivan. (Yes, the minivan! That’s like one step up from borrowing Sydney’s Barbie bike!) Speaking of rules, the participants at Oliver’s “healing center,” in addition to being super crazy, were decked out in white way after Labor Day. To make matters worse, Oliver had already signed with another label as a solo artist, making Crosby’s entire minivan-fueled journey a total bust. Is it any wonder why he immediately hopped on the motorcycle upon his return home?

OK, aspiring Bravermans, let’s hear it: Do you think this is really it for Joel and Julia? Could Max and Dylan actually stand a chance? And how much did you miss Amber this week? Drop a comment with your thoughts below.