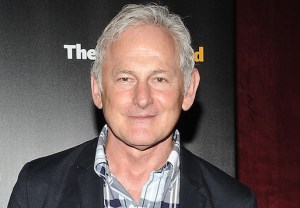 Victor Garber is a man in demand, folks.

On the heels of landing a juicy midseason role on The CW’s The Flash, TV’s erstwhile spy daddy has booked a guest-starring gig on CBS’ Blue Bloods, TVLine has learned exclusively.

Appearing in the Nov. 21 episode, Garber will play Donald Stein, the charismatic scion of a New York real estate dynasty. As a highly respected Jewish leader, Stein is deeply disturbed by the recent murders of several prominent Jewish men in the city. Convinced they are hate crimes, he grows frustrated when Frank refuses to share that conclusion without more evidence.

And yes, Garber’s Blue Bloods and Flash characters share a surname. Though I am assuming no relation.

In addition to, of course, Alias, Garber’s previous TV credits include — yet are by no means limited to! — Power, Sleepy Hollow (where he’s due back this season), Justice and Eli Stone.

CBS’ Blue Bloods airs Fridays at 10/9c, where it is regularly the night’s most watched program.