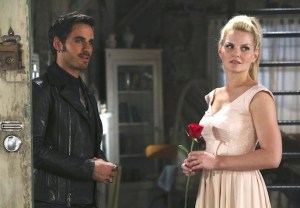 The good news, first: When Once Upon a Time‘s Emma Swan invites Killian Jones out on their first proper date this Sunday (ABC, 8/7c), the eventual outcome is just this side of magical.

“We actually have a great date,” Jennifer Morrison shared with reporters during a Tuesday set visit in Vancouver. “There are a lot of fun elements to it, because we’re seeing both of them so vulnerable with each other. Emma’s genuinely excited about getting to know this person, hopefully outside of crisis.”

And because she and Hook are not out to battle an evil snowman or wrestle with a green witch, Emma allows herself to exhibit a more approachable side, as well. “She’s wearing something that’s very soft and feminine and romantic,” Morrison notes. “That’s something that I think has always been a part of her, but she’s always had to have her guard up so much that she hasn’t felt like she could express that side of herself.” (Here’s where Colin O’Donoghue jumps in to quip, “It took a man who wears leather and a hook to bring out the feminine side in her!”)

O’Donoghue acknowledges that Hook himself “goes to a bit of effort” to dress for the important date, which takes place at a cozy Italian restaurant. (Says Morrison, “He figures out how to dress like a real person. A leathery, real person.”) But that makeover includes striking a deal with Mr. Gold to replace his namesake prosthetic with a proper hand. But as Rumplestiltskin is never afraid to remind us, magic always comes with a price.

Dealing for the hand “was a really, really stupid thing for [Hook] to do,” Robert Carlyle teases. “That comes back to bite him, really badly.”

O’Donoghue elaborates: “[Hook’s] reason for doing it is so he can hold Emma with both hands, if he needs to, on the date…. The only problem is that they come across Will Scarlet, who knocks a drink over Emma, so Hook grabs him — and startles himself a bit [in doing so].”

Because although Killian is merely “standing up for his girl,” as O’Donoghue puts it, the spike in temper at least suggests that something nefarious is possibly… at hand. “He is really trying to suppress being a 200-year-old pirate [who] hasn’t really had to live by the rules,” but in making the trade with Gold, “He feels that [his hand] has been cursed.” 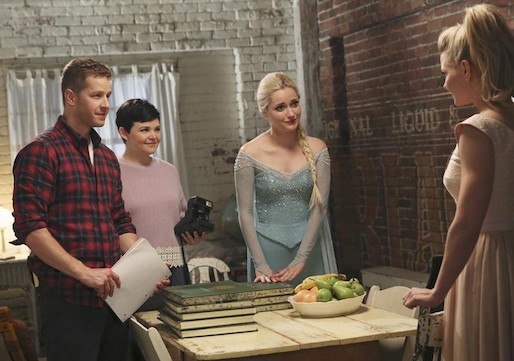 At evening’s end, when all is said and done, Emma’s parents will make up for those missed years of lording over an unpredictable teenage girl by waiting up for their grown daughter — “all night, to know the details”, Ginnifer Goodwin reports. Josh Dallas interjects, “David doesn’t want to know, like, everything, but he waits up…. [Mary Margaret] just wants Emma to be happy, and ultimately that’s what [David] wants for her, too.”

Even if it means bringing a swashbuckler into the fam? “[David]’ll never be OK with the guyliner,” Dallas smiles, “but he’ll find a way to be OK with it, as long as Emma’s happy.” (Reporting by Vlada Gelman)