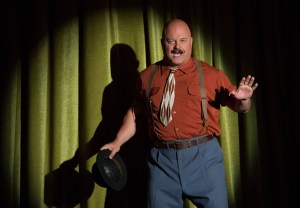 In this week’s episode of American Horror Story: Freak Show, the arrival of Ethel’s ex, hot-tempered strongman Dell Toledo (Michael Chiklis), set off a power struggle so intense, it left one member of Elsa’s troupe headed for the big top in the sky.

Who basked in the glow of the spotlight for the last time? Read on; I’ll tell you…

MISERY HAS COMPANY | As “Massacres and Matinees” began, it seemed as if everyone was suffering. Tormented Twisty the Clown distracted himself from his woes by visiting a toy store to continue his murder spree. But there was no such relief in the (ahem) offing for Elsa, who worried that the curfew being imposed to protect Jupiter’s citizenry from the homicidal maniac at large was going to bury her already-struggling business. Meanwhile, neophyte killer Jimmy’s guilt over dispatching Detective Bunch ate away at him until he even lashed out at his makeshift family (in a scene that was clearly a loving homage to Tod Browning’s classic, Freaks), and frustrated thespian Dandy complained to his mother that he was “turning to dust from boredom” (in largely the same tone that Veruca Salt once used to demand that her father get her an Oompa Loompa). So, all in all, argh!

THE ODD COUPLE | Just when it looked like the going couldn’t get any rougher at Fraulein Elsa’s Cabinet of Curiosities, up rolled Dell, fresh blood on his hands (figuratively speaking), and on his arm, wife Desiree Dupree (Angela Bassett), a head-turner blessed with “three titties, proper girl parts and a dingaling” to boot. Thinking that the freak show could use some more muscle with the cops sniffing around every other day, Elsa hired the tough guy and almost as quickly came to regret it. Not only did he force — gasp! — matinees on her so that they could sell tickets in spite of the curfew, but he gave her billing at the bottom of the flyers next to icky poultry enthusiast Meep the Geek! The newcomer’s short fuse wasn’t exactly a treat, either. Spying idealistic Jimmy trying to help the freaks assimilate into society by taking them to lunch at the local diner — in other words, putting on a free show — Dell beat him to a pulp without ever mentioning that the lobster boy is his son. (In fact, the son whose neck he would’ve snapped when the kid was an infant, had Ethel not intervened.)

SERVING CLOWN REALNESS | Since Jimmy refused to let Dandy join the freak show, the brat returned home in a foul mood… until he saw the surprise that his mother picked up for him on the side of the road: a clown! And not just any clown, either, but Twisty! (I know Gloria’s supposed to be as nuts as Dandy, but who lets that get in their car?!) Though the play date started off awkwardly (a King and I puppet show) and ended worse (Twisty clubbed Dandy after he found the toy shop clerk’s head in the clown’s bag of tricks), the two eventually bonded when Fancypants helped his new pal prevent his abductees from escaping. (No wonder the Motts’ maid — Patti LaBelle — believed he might be the mass murderer stalking Jupiter. He’s certainly creepy enough. And speaking of creepy, thank you, AHS, for the night terrors that the sight of Twisty’s rotting, toothless maw are sure to give me.)

FOWL PLAY | After suggesting to Elsa that he was more than brute enough to protect the freak show — and revealing that he’d even killed Detective Bunch to keep the Tattlers from being hauled off — Jimmy went to work framing Dell for the crime. Unfortunately, the strongman wasn’t all brawn, no brains — he discovered the evidence that the lobster boy planted in his trailer and RE-planted it in Meep the Geek’s before the cops arrived! Horrified by Meep’s arrest, Jimmy decided that he had no choice but to turn himself in and face the music. Alas, by then, the chicken-lover’s goose was already cooked: In a matter of hours, the hooligans in the clink had made short work of Meep!

TWISTED SISTERS | Nearby, Elsa also fixated on death. However, untroubled by things like a conscience, she was focused on a demise that she wanted to facilitate, not prevent. See, it turned out Dot was quite a vocalist. (Bette was positive that she herself would be able to sing. Bette was mistaken.) And, as you can imagine, Elsa did not see the spotlight as being big enough for herself and Dot. So, sensing Bette’s discomfort at her sister’s newfound star status, Fraulein Mars whispered in her ear — tricky as that is, with a conjoined twin! — that Dot was “a dark soul” who had “deliberately eclipsed” her during their performance of Fiona Apple’s “Criminal” (watch below). There was only one thing to do, Elsa suggested. And, since she gave Dot a knife, I think we all know what that one thing is.

OK, your turn. What did you think of the episode? How badly do you wanna just give poor Jimmy a hug — and Dandy the spanking of a lifetime? And gross as Meep was, didn’t you feel awful for him when the inmates closed in on him? Hit the comments!