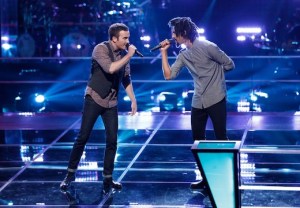 “Push your belly out — like as if you’re gonna go take a poop.”

That may be the most alarming piece of advice dispensed by a guest mentor in seven seasons of The Voice Battle Rounds, but I’ll be darned if Alicia Keys’ prescription for hitting a challenging high note didn’t pay off for Team Pharrell member Taylor Phelan. (Wait, is this what musicians mean by putting some stank on it?)

Scatological humor aside, though, didn’t all six of tonight’s contestants perform the living crap out of their songs? In fact, I’d say that the four singers who ultimately advanced to the Knockout Rounds during this fast-paced one-hour episode — not counting the three who were relegated to the dreaded montage treatment — were superior to each of the nine vocalists who survived Monday night’s proceedings. (OK, maybe Luke Wade is on par, but nobody else!)

With the quality of performances so high, I wouldn’t have objected to an additional ‘Steal’ — or even two — but it seems like our coaches are using their second-chance opportunities verrrry conservatively. (Which, I suppose, is better than wasting ’em capriciously.)

Also, because I love a good conspiracy theory, how is it that over three hours of Battles, we’ve only seen a single matchup from Team Blake? I know the dude is ridiculously popular, but at this rate, I’m worried the producers will lock him in a steel cage with just a small opening for his eyes and lips to mute his vote-generating charm in future seasons.

Bonus observation: Pharrell consoling Adam’s ousted child contender with a firm-but-gentle pep talk makes him the obvious choice to occupy the far left chair when Adam inevitably sits out Season 9 or 10. (C’mon, Adam simply has to sit out a cycle at some point, yes? Somewhere, Xtina is raising a Gospel hand to that idea.)

But enough about my reality singing competition flights of fancy! Let’s get to the very challenging business of ranking tonight’s trio of Battles in order from least- to most-promising winner.

3. (Team Adam) Alessandra Castronovo defeats Joe Kirk on “Stay” by Rihanna ft Mikky Ekko | Adam was right that Alessandra’s got the Big Diva Gestures — and accompanying vocal spotlessness — down pat. But he was so effusive about his bro-connection to young Joe that I actually felt mid-performance rage that the sweet, but slightly too-nasal teenager was going to win. And I doubled down on the bad vibes when Blake inexplicably told Joe he’d given “one of the most perfect vocals” in Voice history. (Ummm, was dude asleep during Amber Carrington’s epic Season 4 “Stay”?) Thankfully, though, raw talent prevailed over Y-chromosome ownership/One Direction-level hair, making Alessandra a true Season 7 dark horse. If Blake really believed what he’d said about Joe, though, how come he didn’t press his button for a steal? Could it be some of his homespun feedback is a wee bit contrived? #gasp

2. (Team Pharrell) Taylor Phelan defeats Jordy Searcy on “Breakeven” by The Script | Two acoustic troubadours, one big breakup anthem and not a single note out of tune. I ultimately wound up understanding guest mentor Alicia Keys’ rehearsal fear that these two fellas kind of blended together in too perfect harmony to stand out, but there’s a touch of star quality — and a slightly more invested delivery — that Taylor brings which made him the correct choice to advance.

1. (Team Gwen) Troy Ritchie defeats Menlik Zergabachew on “Maneater” by Hall and Oates | I was a little obsessed with the fullness and grit in Troy’s tone right from his underhyped audition, and the innate sense of rhythm and effortless phrasing he brought to “Maneater” only makes me more excited about his prospects as a true Team Gwen contender. Dude is so good, I actually forgot to write anything in my notepad the first time through the performance. That said, Menlik’s explosive growth from Blinds to Battles took me by complete surprise; his ability to add reggae inflections without every grazing the edge of cheesiness is pretty potent stuff — and with Pharrell in his corner, I’m genuinely excited to see what he does next.

Your turn. What did you think of Tuesday’s Battle Rounds? Take our poll below, then sound off in the comments!