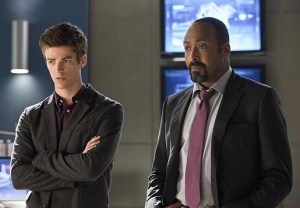 Detective Joe West is not about to give up his title as the most important man in The Flash‘s life.

As the person who raised Barry, Joe is fiercely protective of the young man, we learn in this Tuesday’s episode (The CW, 8/7c) — especially when it comes to a new father figure in the upstart superhero’s world.

In fact, Joe’s portrayer Jesse L. Martin reveals that his character would like to see Barry running at top speed in another direction — away from Dr. Wells and his S.T.A.R. Labs crew. The actor also previews Joe’s big moment with Barry’s biological father and his growing suspicions about daughter Iris’ secret romance.

TVLINE | Now that Joe is aware of Barry’s secret, how is that relationship going to work in terms of who calls who about criminals?
At this point, in the second episode, I’m not calling Barry about criminals. I’m just trying to keep close to Barry because he has taken on this whole thing himself. He’s decided that he’s going to go out there and fight crime as The Flash. And I sort of blame Harrison Wells and the S.T.A.R. Labs crew for turning him into this crimson crime fighter. I feel like they’re putting him in danger for no real good reason and I’d rather he not do it. My whole thing is that Barry’s got a job and he should be doing that job; he’s very good at it and it’s a lot less dangerous. I have a huge issue with [The Flash identity and what it entails].

TVLINE | Does knowing Barry’s secret also put a target on Joe’s back?
Of course, because all these metahumans are coming out of nowhere suddenly and who knows why they are motivated to do what they do. Some of them do great things. Some of them do horrible things. Because Barry is out there trying to stop whoever is doing the bad things, I’m certainly involved for many reasons– one being I’m Barry’s surrogate father, and one being that I am very protective. So yeah, there’s a lot of danger involved. These are not just regular run-of-the-mill criminals. These are guys who have really done some horrible, horrible things. Of course it puts a target on my back. I’m not worried about Joe so much. I’m worried about Barry and Iris and even my partner Eddie.

TVLINE | Do you get to go up against any of the metahumans?
That’s the best part about the job! [Laughs]

TVLINE | So you got to do some stunt action/fight scenes?
Well, not so much fighting, but more shooting. [Laughs]

TVLINE | Joe is a detective. Does he really not know, or at least suspect, that Iris and his partner are dating?
He has a suspicion. They’re not very good at hiding it. She’s a grown woman. So it’s not like I can tell her who she can date and who she can’t. I can’t do that. I can be very upset if it’s my partner. [Laughs]

TVLINE | Barry has multiple father figures. How are Joe and Wells going to get on, especially since they have such differing opinions of what Barry should be doing?
Initially, there’s a bit of jealousy on Joe’s part, particularly when it comes to Wells, because Barry does spend a whole lot of time with him and the gang at S.T.A.R. Labs. He’s not particularly happy with what S.T.A.R. Labs is encouraging Barry to do. And he doesn’t particularly trust Wells. So he’s not sure he likes the notion of Barry being so close to this guy. And Barry has a reverence for Harrison that Joe doesn’t understand. At all. He just doesn’t understand what Barry sees in him.

TVLINE | What can Wells can give Barry that Joe can’t?
That’s a good question. Both [Barry and Wells] are scientists. I can’t possibly connect on their level. I don’t know the things they know. They can speak in a language that I will never understand. Like I said, Barry has a reverence for that kind of thing, particularly in Harrison Wells. That’s one thing that Harrison offers that I cannot offer. They can nerd out, particularly with Cisco and Caitlin. Those are his peeps, if you will. I’m just Joe and sometimes Dad. 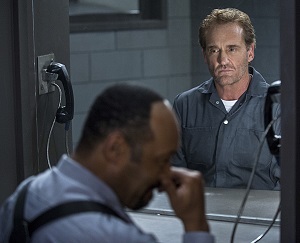 TVLINE | Joe is going to visit Barry’s biological father in prison. What sort of confrontation are we looking at here?
It’s not a confrontation at all; it’s more of an apology. Barry spent all this time talking about the red and the yellow lightning and the red and the yellow suit. And for the longest time, nobody believed him, including myself — and suddenly I know the truth and I have to deal with the fact that he might be right about his dad also.

TVLINE | What does Joe have over everybody else?
The relationship. I am Dad. I am there when it really comes down to things. Barry always comes to me. When something is bothering him, he will come to me. He won’t go to Harrison Wells to talk about his real life. He comes to me.

TVLINE | What’s Joe’s role in the big Arrow/Flash crossover?
Joe doesn’t have much of a role in the crossover, I must say. It’s more about Barry and the two kids at S.T.A.R. Labs, Cisco and Caitlin. They do a lot more work in that case than Joe does.

TVLINE | Is there someone from Arrow you hope to work with then?
Sure. I absolutely love Stephen [Amell] and would have loved to get to do more. But we have plenty of time.