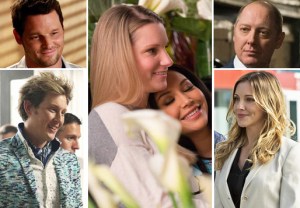 Question: Got any new intel on what’s coming up on Glee‘s sixth and final season? —Julius
Ausiello: If the Season 6 scuttlebutt is to be believed, members of the Citizens for the Unification of Brittana can go ahead and start planning that victory parade. One word of caution: Apply for the necessary permits now. I had to cancel my annual Smurf parade last week because the permits didn’t arrive on time. Grouchy Smurf was not pleased.

Question: So now with Gilmore Girls streaming in Netflix, is there hope for a reunion movie? —Mindy
Ausiello: Great, Gilmore-obsessed minds think alike, Mindy. The conspiracy theorist in me suspected the Netflix deal was a precursor to a much bigger Gilmore announcement, but all my investigation turned up was a series of prolonged eye rolls and one really loud cackle. But I’m not ashamed. It takes a real man to carry a torch for Gilmore Girls.

Question: Can you give us any scoop on Grey’s Anatomy? —Annie
Ausiello: As if losing the board seat to Bailey wasn’t bad enough, in Thursday’s episode, “Only Mama Knows,” Alex finds out just how badly betrayed he was by two colleagues he thought had his back. (And maybe even worse, why!)

Question: Guys, I’m super bummed over this Unforgettable cancellation news. Is there any chance another network might grab it? Maybe TNT or USA or someone? —Lindsey
Ausiello: Highly unlikely at this point. I heard even the MIA Network isn’t interested, and, as you know, those guys will take anything.

Question: Any scoop on what’s coming up for my favorite Revenge character, Nolan? —Keith
Ausiello: Well, Keith, your favorite character is going to make a bold move on Sunday’s episode, and it’s not going to sit well with Ms. Emily Thorne. The ever-private Emily wants to keep last week’s intruder incident under wraps — especially from a certain cop friend of hers — forcing Nolan to go behind her back to keep her safe (and we all know how much Emily loves when people go behind her back).

Question: Any spoilers on Revenge? —Ferlay
Ausiello: Well, Ferlay, how about a nasty spoiler about a certain estranged father? Sunday’s episode reveals a habit of David Clarke’s that we’ve never seen before. No one’s seen it before, in fact, and something tells me he wouldn’t want Victoria catching him in the act.

Question: What do you know about Henry’s plan on Sleepy Hollow? Why does he have that miniaturized version of the town? —Raj
Ausiello: “Every man has a hobby,” executive producer Len Wiseman jokes. “He’s orchestrating a bigger plot and bigger plan. Really, the [3-D] map of Sleepy Hollow is not that different from an operations board. It’s his creepy operations board with his plan.” Though Wiseman and showrunner Mark Goffman won’t spill much about what the Horseman of War has up his sleeve, Goffman does say that there’s a “really tense” scene in the midseason finale, and Henry is in it.

Question: When are we going to see Abbie and Jenny’s mom on Sleepy Hollow? —Courtney
Ausiello: Mid-November. Aunjanue Ellis will debut as Lori Mills in Episode 9, titled “Mama.” Fun fact, courtesy of Goffman: We were originally going to meet Lori in Purgatory in the premiere, but because the Season 2 opener was “a bit of an overstuffed sandwich,” that scene will now air as a dream sequence in Episode 9.

‎Question: Was that NCIS‘ Scottie Thompson in the new Blacklist promo? Who is she playing that is so important to Red? –Dee
Ausiello: Yes, ma’am, that was her. She’s playing Zoe D’Antonio, a charming blue-color gal who holds a key to Red’s past. Her four-episode arc kicks off on Oct. 20.

Question: Before the first half of Once Upon a Time‘s season ends, will we find out who wrote the storybook? —Tom
Ausiello: Actually, no. As cocreator Eddy Kitsis revealed to Matt Mitovich at the New York Comic-Con panel this past weekend, Regina and Henry’s “Operation Mongoose is going to be a rather big story for the year. Whereas we are splitting seasons in half, this is a story that will transcend both halves.”

Question: If Maleficent is heading back to Once Upon a Time, does that mean we’ll see Aurora and Prince Phillip too? —B.D.
Ausiello: Oh, you’ll see Sleeping Beauty well before Maleficent’s midseason encore. When we recently chatted up Sarah Bolger, she was already heading back to shoot her second episode of the season, but we’ll first see Aurora in Episode 7, now “out of her princess gear” in Storybrooke. As for Phillip, Julian Morris is currently busy with New Girl, to be followed by Amazon’s Hand of God, but Bolger trusts, “I’m sure he will be [back],” in some capacity. 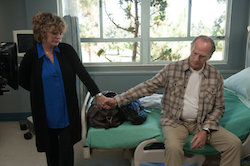 Question: Any more info on the death story line on Parenthood this season? I can’t help but wonder if Zeek’s heart condition is a red herring and something worse is on it’s way. —Suzanne
Ausiello: I’m actually hoping Zeek’s health issues are a misdirect. Call me callous, but his death would feel too obvious (and therefore a bit of a cheat) at this point. But I have no concrete evidence pointing to such a bait-and-switch.

Question: Can you find out if Zack will be in the 200th episode of Bones? —Redbird
Ausiello: He won’t be. I think it’s fair to say Zack will never be returning to Bones, so whaddaya say we move on, K? BONUS SCOOP: New guy‘s an official series regular.

Question: Is this the season New Girl will introduce Schmidt’s parents? —Joel
Ausiello: That’s TBD. The big Schmidt news is that the show is planning to introduce a major new love interest for him around midseason. BONUS SPOILER: The show’s Thanksgiving episode is titled “Bangs-giving” (and that’s not a hair reference).

Question: My dear dear TV guru, I saw a very ominous tweet from the lovely Scott Porter which has me worried that Hart of Dixie will end after its upcoming fourth season. Please tell me it isn’t so! —Tina
Ausiello: No official decision has been made about a fifth season, but I’m told producers hedged their bets and wrote a Season 4 finale that could serve as a satisfying series finale, if need be. Probably a smart move considering Dixie barely survived to see a fourth season.

Question: I need some scoop about House of Lies, please. —Hani
Ausiello: Clyde will come face-to-face with his own Ghost of Christmas Future in Season 4 when his super-slick dad appears on the scene and proceeds to charm the pants off everyone (except his son, natch). Look for pops to stick around for at least four episodes.

Question: Can you please tell me something about Laurel from Arrow? —Micaela
Ausiello: In addition to mourning Sara alongside familiar faces, the stages of grief also will point Laurel in the direction of a stranger — gym owner Ted “Wildcat” Grant, to be played by Emily Owens alum J.R. Ramirez starting with Episode 3. Meeting through her work for the D.A.’s office, “At first they definitely butt heads, but ultimately he surprises himself with the amount of respect he develops for Laurel,” Katie Cassidy tells us. And as one might surmise, given Laurel’s destiny to claim the Black Canary mantle, Ted is “definitely a part of her journey. He can see the potential that she has, and wants to help her evolve and grow.”