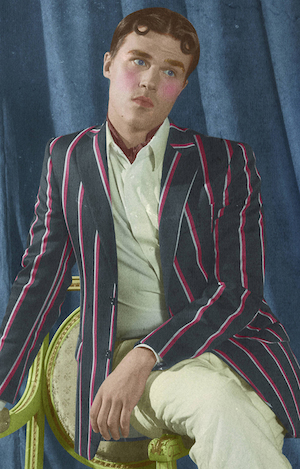 When FX’s American Horror Story: Freak Show opened its gates for admission last week, the frightening figure most everyone walked away talking about was Twisty the Clown. But in Episode 2 (airing Wednesday, 10/9c), bitchy rich kid Dandy Mott, whom we’ve only seen sitting in the audience with his mother Gloria, reveals unsettling quirks of his own.

TVLine invited Finn Wittrock – whose previous TV credits include Masters of Sex and All My Children — to take us inside Dandy’s well-coiffed, un-well head, affording us all reason to soon be very, very afraid.

TVLINE | I noted the other day on Twitter, after seeing Episode 2, that your character is quite possibly the second-creepiest, after Twisty the Clown. How was Dandy originally presented to you?
Basically as “a kid who never grew up.” We talked about a kid who’s incredibly wealthy but emotionally stunted at a certain age, and we’ll learn that there was some trauma in his youth — and also that there might be a bit of incest happening. We’ll also learn that maybe, more broadly to say, psychosis runs in the family.

TVLINE | How would you describe the dynamic between he and his mother (played by Frances Conroy)?
It changes every episode, but he’s still very, very dependent on her, yet he’s trying to claim his independence, as you kind of do in your adolescence. 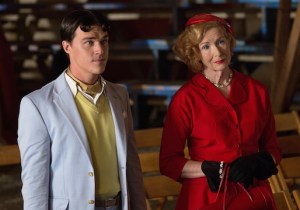 Except his form of finding himself goes in a very dark direction.

TVLINE | Is his mother almost an enabler in some respects?
Well, yes, in that she’s spoiled him all his life, basically giving him whatever he wanted because she was scared of what he could do. She learned at a young age that he had some pathological tendencies.

TVLINE | He also has a very specific diet, as detailed in Episode 2….
He loves sweets. But he also likes caviar, snails. And you see me drink Cognac from a baby bottle.

TVLINE | He’s also got an ornate toy room back home.
I have a playroom with croquet courts, a puppet theater…. Dandy wanted to be an actor, so he’s a frustrated thespian. And because Mom wouldn’t let him be an actor, he has to express himself in other ways, by generally impressing harm on other beings.

TVLINE | This week, Dandy is kind of in the doldrums. He’s bored. He’s frustrated. What’s his mom’s solution to remedying that?
Well, she gets this clown (Twisty) that she finds on the street to basically be his companion. He becomes very enamored by the clown and becomes his acolyte. The clown basically becomes his role model for life. He wants to be him. And he might succeed to a degree.

TVLINE | Proving that sometimes the best place to find a playmate for your kid is on the side of the road!
Definitely, if you’re this kind of kid. [Laughs] He and his mom live in their own universe. 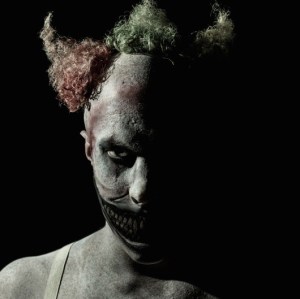 and you’ll find in Episode 4 that there is a human side to the clown. We will learn his backstory, and we’ll actually see a sort of humanity in him. That won’t cease to make him the scariest character on television, but I think you’ll understand how he got that way.

TVLINE | Your TV mom, Frances Conroy, is a splendid actor as well.
She’s fabulous. We have the same alma mater, actually, so we’ve been reminiscing about our days at Julliard. She’s based her character on Gloria Vanderbilt and she has that very awesome, mannered, mid-Atlantic way of speaking, which she pulls off effortlessly. It’s been a real honor to work with her.

TVLINE | From what you’ve seen, are the likes of Frances Conroy, Jessica Lange and Kathy Bates simply having a blast doing this show?
Definitely. The thing about [American Horror Story] is it gives everyone a new challenge every year. You don’t fall into the same rotes of doing one character for four seasons or more. Every year, Ryan [Murphy] gives these incredible actresses a new challenge, and that keeps it fresh and exciting for an actor. All of a sudden, you get to have two heads — how do you act that?

TVLINE | Dandy, we will learn, desperately wants to join the freak show. What could he possibly have to offer as a talent?
Oh, none. I mean, he does know the entire Cole Porter canon, but…. He just knows that he’s a freak inside and hopes that Jimmy (played by Evan Peters) can see that. Part of the message of the show is that Dandy is the biggest freak, although he looks the most normal.

Want more scoop on Freak Show, or for any other show? Email insideline@tvline.com and your question may be answered via Matt’s Inside Line.