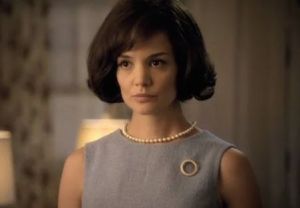 Katie Holmes will reprise the role of Jacqueline Kennedy in The Kennedys — After Camelot, Reelz’s four-part follow-up to the 2011 miniseries The Kennedys.

Holmes will also serve as an executive producer on the new mini, which is based on J. Randy Taraborrelli’s After Camelot: A Personal History of the Kennedy Family (1968 to the Present), as well as direct one of the four episodes. The Kennedys‘ Jon Cassar will helm the other three.

“The Kennedys was a brilliant execution of storytelling based on the lives of one of the world’s best known families,” Reelz CEO Stan E. Hubbard said in a statement. “Katie elegantly portrayed Jackie Kennedy in the first miniseries and now will continue the role as Jackie grows into the Jackie O that the world knows best.”

Jackie Kennedy married Greek shipping magnate Aristotle Onassis in October 1968, four years after her first husband, President John F. Kennedy, was assassinated. The new mini — which begins filming in spring 2015, with an eye on a 2016 premiere — reportedly will pick up with the June 1968 assassination of Jackie’s brother-in-law, New York senator Robert F. Kennedy.

The original, eight-part Kennedys miniseries amassed 10 Emmy nominations and grabbed gold in four, including for Lead Actor in a Miniseries or Movie (which went to Barry Pepper for his portrayal of Robert).