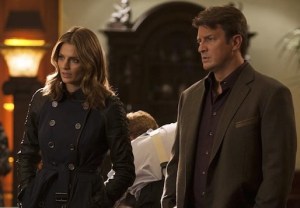 This week on ABC’s Castle, Kate and Rick dealt with a clear and present danger, when an “invisible man” seemingly killed a random pool hustler. But all was not as it… appeared.

So we’ve moved on — mostly, save for a light-hearted reference here and there — from Rick’s Great Amnesic Mystery, and it feels good. I’m certain they’ll circle back to it at some point(s), just as the Johanna Beckett Mythology popped up now and again. But short of doling out meaningful answers, which they are in no rush to do, it’s best if we just jump back into fun cases.

I had my doubts when David Amann first told me about the “invisible man” during summer press tour — a “far-out” case where everyone doubts Rick — and the cold open for this episode had me fearing the worst, what with the victim scampering away from no one. But I’ll give them props for going the whole nine yards and having the killer be exactly that — “invisible,” or (to be more scientific) cloaked. And even Kate felt the unseen’s brute force, making her a believer.

My money was on the nerdy neighbor being the ultimate culprit, if only because the ex-girlfriend seemed so meek. But isn’t that always the case with cold-blooded killers? (That said, would she be strong enough to drive a pool cue into a grown man’s torso? Oh, crimes of passion….)

Speaking of passion, a round of applause for touching on the very real story point that Rick and Kate have “gone without” for months — especially difficult for her, since she wasn’t amnesic the whole time! Any while the Martha interruption elicited a quite audible groan from me, the significant portions of rolling around in bed, and then Beckett’s “invisible” boudoir attire, made up for it.

As icing on the cake, we also learn that to start saving for Grace’s $250,000 college education, Ryan is moonlighting as a bouncer…at a strip club. A male strip club. Raising the question: If I have two kids just seven years away from college… Uh-oh.

NOTABLE QUOTABLES | “Did the Invisible Man goose you? Theyre like that, so gauche”…. “Is it Bottoms Up? Pole Position? Oh, The Landing Strip?”/”Men-hattan”….  “I so missed these mind melds!” (We did, too, Rick.)

What did you think of “Clear and Present Danger”?