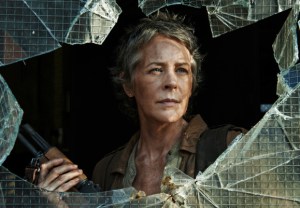 Unless you were hoping to see Rick show up on the Terminus Dollar Menu, the fifth season premiere of The Walking Dead was supremely satisfying. Not only were there reunions guaranteed to make you sniffle (OK, fine — sob!), but there was also walker carnage aplenty and enough backstory to make you empathize with the cannibalistic Termites as much as loathe them. Let’s review, shall we?

BOB’S… BURGERS?!? | While Gareth selected Bob, Rick, Daryl and Glenn to be turned into cutlets first, other Termites spread out to set off fireworks in hopes of confusing and redirecting a herd of walkers that was headed toward their compound. Unfortunately for the warm-blooded man-eaters, Carol got the drop on one of them as he gossiped about the new arrivals on his walkie-talkie — he even called dibs on Carl’s hat, the bastard! Worse — for the baddies, that is — Carol took this new intel, left Tyreese behind with Jabberjaw and Judith, and headed off to rescue the soon-to-be-dead meat.

WHERE’S THE BEEF? | Arriving at Terminus yuckily disguised as a walker, Carol — badass that she is — went all John McClane on the place, affording Rick (still clueless as to the identity of the cavalry) the opportunity to dispatch his butchers. Next, as he, Daryl, Glenn and Bob made their way back to the train car to free the intended dinner specials, Carol retrieved Daryl’s crossbow from Terminus’ Lost & (Never to Be) Found. But before she could reveal herself to the group, she’d have to get through Mary.

STOP, CHEF | Though Mary insisted that, in the beginning, Terminus was the safe haven that its signs promise, hooligans moved in and rained down such atrocities on the Good Samaritans that they were forced to realize, in this world, “you’re the butcher, or you’re the cattle.” So they took back their stronghold and, ever since, maintained a kill-or-be-killed mentality. Nonetheless, Carol wasn’t going down without a fight, and (thank God) this was another one that she was able to win, shooting Mary in the leg and leaving the chef to be the walkers’ catch of the day.

HIT PARADE | Back at the shack where Tyreese was holed up with Judith and his Termite captive, the Chatty Cathy did his damnedest to get inside the big guy’s head, suggesting that, since the baby sitter’s never had to do any dirty work — diapers don’t count? — both he and the tot were already on borrowed time. However, when the villain managed to get his hands around Judith’s neck, Tyreese proved beyond a shadow of a doubt that he was more than capable of doing whatever it takes to protect her. (In other words, mess with Lil Ass-Kicker, and Big Ass-Kicker will beat your last breath out of you!)

ALWAYS LEAVE ’EM WANTING CURE | While Abraham climbed the walls of the train car wondering WTH was the meaning of the chaos erupting outside, Sasha challenged Eugene to reveal the cure that he’s always touting. And, though he argued that even if his explanation came with a list of FAQs it would still be over their heads, he did allow that it has something to do with a human genome 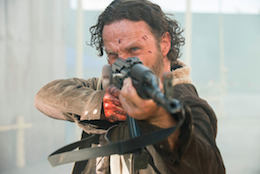 SO, UM, BYGONES? | On his way out of Terminus, Rick winged Gareth and wanted to do away with all of the cannibals. But, not being quite so blood-thirsty, Rick’s cohorts were content to let the place burn and allow the stragglers to run. They were all soon distracted, anyway, by Carol’s appearance. And if you didn’t well up when an overwhelmed Daryl — arguably the show’s toughest guy — ran into her arms, you might actually be a walker yourself. Even Rick — who banished Carol — was so grateful for her assist that he embraced her. Of course, she had a surprise in store for him. And, after leading the group back to the shack, she and Tyreese reunited Rick and Carl with Judith (and, obviously, Sasha was reunited with her brother, too).

MOVING RIGHT ALONG | As their happy tears dried and the gang began trudging down the railroad tracks toward parts unknown — or D.C., if Abraham gets his way — Rick changed one of the Terminus signs to read (like the title of the episode) “No Sanctuary.” (Also acceptable would have been “No Duh.”) And finally, we were left with one last glimpse of the horrors that transformed Gareth and Mary (his mother, it turned out) into monsters. (Is this also what’s to become of Rick and Co.?) Then, just when we thought the episode was over, the show surprised us — especially me, since it wasn’t on the screener (hence, no mention of it in the earlier draft of this recap) — by sending Morgan down the same tracks as our heroes.

OK, your turn. What did you think of the season premiere? Which moved you more — Carol and Daryl’s reunion or Rick and Judith’s? Hit the comments!