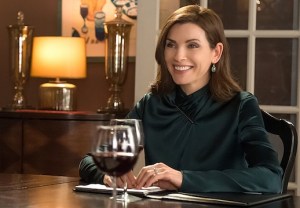 To quote Keanu Reeves in The Matrix, “Whoa.”

Alicia wades into the forehead-deep mire of political opposition research on this week’s installment of The Good Wife, but instead of drowning in possible scandal — photos of herself and late lover Will at a hotel reception desk, son Zach’s girlfriend’s secret abortion, mother Veronica’s spanking of Damien from The Omen in full view of a department store surveillance camera (which, frankly, had to be worth a two-point bump, no?) — she strides over the surface with newfound fire and (thank goodness) her weary sense of humor in tact. (Copious pours of robust red vino don’t hurt, either, but more on that in a moment…)

“Alicia,” our protagonist sighs after her would-be campaign manager once again calls her Mrs. Florrick. “Anyone who’s pawed through my underwear drawer should really call me by my first name.”

I know, I know, The Good Wife has enough problems getting egregiously snubbed in the Emmy race for Best Drama Series — Darkness at Noon keeps taking that sixth slot — but I’d argue it also packs in more laughs per minute than 90 percent of sitcoms currently in production. Can Robert and Michelle King lobby the Academy of Television Arts and Sciences to submit half their performers in the comedy races — or at least Stockard Channing, whose droll response to Alicia’s announcement about running for State’s Attorney — “Why not just take a trip? You’d love Bali” — places her character alongside Lucille Bluth and Marie Barone in the Cantankerous TV Mothers Hall of Fame.

But none of the ramblings above actually get to the heart of what happened in Episode 4, “Oppo Research,” so let me get to the business of recapping:

We open with the glorious sound of a wine cork popping and the sight of Alicia — in an apron! — preparing her home for a sit-down with Eli about her decision to run (or not) for office. But as the cabernet breathes on the dining room table, our protagonist gets the wind knocked out of her when Eli notes they’ve only got eight months ’til the election, six months ’til the debate, and four days (!) to announce her candidacy. Oh, and because nothing in Eli-land can every be presented with absolute transparency, he’s unexpectedly invited a potential campaign manager, the unflinchingly direct Jonny Elfman (Steven Pasquale), whom Alicia is allowed to dismiss after 20 minutes if she doesn’t dig him. (Little does she know, Eli’s placed Jonny in a similarly disarming situation.) Bonus hilarity: Grace and her school choir friends sporadically harmonizing on “I Will Trust in the Lord” from the bedroom during the meeting’s most tense moments.

Jonny, who’s tired of working with political neophytes, demands to know why Alicia is thinking about throwing her hat in the ring, but when he cuts her off mid-sentence to hurl more insistent questions her way, she’s as cool as bathroom tile in January. “I’m not finished yet,” she says, unruffled. “Do you want me to finish?” (I love how Julianna Margulies imbues Alicia with a special sense of menace whenever male characters underestimate her womanly strength.)

Finally, Eli and Jonny cut to the point: They’ve brought along a thick file of “oppo research” that unearths and categorizes all of Alicia’s weak points as a candidate. Not only are Colin Sweeney, Lemond Bishop and The Paisley Group considered problematic as clients, but there’s also the matter of Alicia’s family business.

* Turns out Zach’s ex-girlfriend Neesa had an abortion — and Margulies’ combination of shock, horror, anger and indignation (about possibly being the last to know) as she asks “why?” “when?” and “what day?” ranks among her finest moments in Good Wife history. Jonny reminds her it’s important that Alicia “inure” herself through the process, and so she sips a little more from her liberal goblet and gets more unwelcome news.

* Alicia’s mother spanked an unruly child in a department store — setting up a potential lawsuit and a PR nightmare.

* And then there are the suspicious pictures of Alicia and Will — as well as the one of Finn Polmar exiting her apartment at 8:30 on a weekday morning. (“I don’t like my kids seeing who I sleep with — how could they get out in time for their abortions,” she says with brutal sarcasm to explain the time stamp of Finn’s exit.)

Alicia’s attempts to “fix” her family “liabilities” meet with varying degrees of disaster: Owen dumps his vino and exits without a word when she probes him about his affair (a somewhat galling response considering how free he is with unsolicited advice for big sis). Alicia winds up hanging up on Zach in disgust and a deliciously realistic lack of resolution — “have fun in college” — although perhaps she ought to have at least come up with a genuine answer to his knee-jerk query, “Why are you running for State’s Attorney?” (Has she answered that question to anyone’s real satisfaction — beyond the surface-level delight of “to beat that rat-fink Peter Castro”?) And while Veronica’s initial apology to the spanked child’s mother ends in hilarious disaster – “I should’ve spanked you, you bitch!” — further store-cam footage neutralizes the political threat. #BratsWillBeBrats

* Alicia goes to a bar to share a glass of wine with ADA Finn — to make sure he’ll tell the truth about the nature of their early-morning meeting. One her way home, she gets pulled over by a cop who makes the mistake of dropping this salutation: “Good evening, Mrs. Florrick, have you been drinking?” (Ummm… how’d he know he was pulling over the governor’s wife before her window was barely rolled down?) The officer won’t comply with her request for a breathalyzer, and so as Alicia walks in a straight line on the sidewalk, iPhone footage gets captured by random (or perhaps not-so-random?) passers-by. Next thing you know, a tabloid site is blaring headlines of Alicia heading to detox for alcohol addiction — with grainy images of her run-in with the law illustrating the ugly lie. Two questions: Is it possible Finn was in on the sting — and his imploring that she stay and have a drink with him was fueled by darker motives? And secondly, is there any concern that Alicia’s wine glasses are big enough to give Cougar Town‘s Jules a run for their money? (Doesn’t bother me at all, but like atheism, the number of glass bottles in Alicia’s recycling bin could prove a future liability at the polls.)

* Bishop, for his part, hears out Diane, Cary and Alicia’s speech about how he needs to find a new firm — since Florrick-Agos is suffering a conflict of interest representing both Agos and Bishop — but he smiles his menacing/charming smile and says, “No. But thank you.” He lures Kalinda into his van later, and after she spills details of Alicia’s political ambitions (what choice did she have?), a “grass roots” PAC supporting Alicia’s campaign pops up online. Who’d have guessed it’s Bishop behind the “kindness.” Maybe there’s something to be said here about “keeping your friends close and your enemies even closer,” but all I can say is Alicia’s entanglement with the hot, cool and collected drug lord continues to add to the moral ambiguity of her life.

* And finally, in the trial of Red-headed Panty-less Intern, Peter finally gives Eli the OK to eject the ambitious sexpot Lauren to a position in the state capital. Alas, though, it turns out Peter wasn’t getting it on with the twentysomething, he was doing a favor to her mother, a sexy family friend named Ramona (Connie Nielsen) who laughs wayyyy too easily at the governor’s jokes. Eli’s double-down on suspicion over the revelation only makes me love him more — even if his hair color changes scene to scene, episode to episode.

Last question: Are we OK with the idea of Alicia saying “yes” to Jonny without so much as a single scene of her discussing her future — in politics and at Florrick-Agos — with Cary?

On that note, I turn it over to you…

What did you think of this week’s Good Wife episode? Are you more or less excited about Alicia running for office in the wake of “Oppo Research”? And how did you feel about Alicia’s handling of her issues with her mom, son and brother? Sound off in the comments!