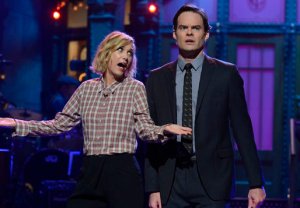 This week’s installment of Saturday Night Live with host Bill Hader had the potential to go one of two ways.

On the optimistic side of the equation, what better choice of emcee than a beloved, eight-season vet of the show, a guy who certainly wouldn’t have any issues with the on-the-fly workings of Studio 8H?

Nevertheless, with SNL presenting its third fresh installment in a three-week period, the question loomed, would the show’s inconsistent writing staff have enough time to create memorable setups and zingers?

Thankfully, this was an instance where — despite a deplorably unfunny cold open and an opening musical monologue dubiously hijacked by Kristen Wiig and Harvey Fierstein — the majority of sketches proved solid, or at least not uninteresting. Heck, that closing scene with Cat in The Hat as the mom’s ex-lover may not have been perfectly conceived, but at least it spared us yet another turgid game-show parody, right?

Below, my picks for Best and Worst Sketches:

BEST: HERB WELCH
Hader served up his crotchety (and recurring) “WPDX News” reporter with a deliciously acidic dressing — randomly hurtling grampy-grumpy doozies at Taran Killam’s hapless anchor like, “I know you’re smooth down there!” and “Why didn’t your wife take your last name?” I laughed from start to finish, even if newbie Pete Davidson was essentially wasted as Hader’s straight man.

BEST: PUPPETRY CLASS
I almost awarded a “Best of the Night” to that viciously funny bit with Hader asking for famine aid of “39 cents a day” — and impoverished recipients demanding he start his plea at a higher number and railing against his inability to identify their location any more specifically than “Africa.” (Side note: How is Leslie Jones not yet a full-fledged repertory player?) But another of Hader’s returning characters, war-vet puppeteer Anthony Peter Coleman of “Operation Urgent Fury,” dropped too many dark and horrifying anecdotes — “Here’s a joke… God!” — to not take home top honors. Actually, would an “Urgent Fury” summer action-comedy be such a bad thing?

HONORABLE MENTION: STEFON ON “WEEKEND UPDATE”
I’ll say nothing about the thrill of Stefon on my screen, other than to repeat the following ingenious monologue: “If you’re some dumb folks looking to get murdered, I know just the place for you: New New York’s hottest club is ‘Jan’s New Backpack.’ Discovered by a lackluster gay realtor name Anthony, who’s late for every viewing, this Park Slope slop-bucket gives new meaning to the question, ‘Is that the little woman who played the principal in Kindergarten Cop?'” (And if that quote doesn’t at least make you grin, it’s possibly our senses of humor are completely divergent.)

WORST: KIM JONG-UN
Poor Bobby Moynihan — completely underutilized for most of Season 40, then stuck with the thankless task of headlining the week’s opening sketch about North Korea’s “supreme leader” being absent from public view due to gout and diabetes. This one was about as enjoyable as a pair of broken ankles — without any prognosis for recovery.

WORST: “Inside SoCal”
Kyle Mooney and Beck Bennett’s digital shorts aren’t everyone’s taste — though admittedly, there are instances I find them uproarious. This revisited setup about San Diego kids aimlessly drifting through a public-access haze, however, felt more like two actual deadbeats who stumbled their way onto a TV set rather than a couple of actors mining laughs from two fictional deadbeats who stumbled their way onto the television — if that makes any sense.

What did you think of this week’s SNL? How would you rate Hader as a host? What was your favorite sketch? Take our poll below, then sound off in the comments!