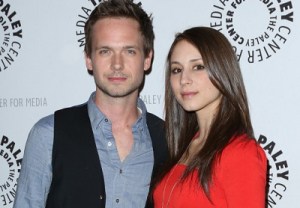 Does Suits‘ Rachel have something to be worried about?

Fret not, Mike and Rachel fans — Bellisario’s Claire, who is an idealistic law student and volunteer at a social services law clinic, will only appear in flashbacks to Mike’s past as a bike messenger.

After the two meet and begin dating, things get complicated when Mike tries to help Claire with one of her cases, and the result will cause him to question his life’s trajectory.

Bellisario is returning a favor of sorts: Adams has appeared on the actress’ ABC Family series as Ezra Fitz’s college friend, Hardy.

Her episode will air in the second half of Suits‘ fourth season, premiering in early 2015.