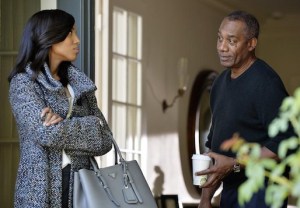 This week on ABC’s Scandal, Olivia reconnected with a friend who’s full of surprises, Jake roasted Rowan, David (and Abby) fought for their place “inside the bubble,” Quinn spent the night with a most unlikely person and Cyrus pondered the price for quenching a thirst.

Three episodes in, I’m finally starting to feel some momentum building in Season 4. The past couple of weeks had their “moments,” and some terrific performances, but it all felt so segregated, that everyone was just doing their own thing. Maybe it’s also because it’s hard to see Mom and Dad (Olivia and Abby) fight!

First up, Mellie seems a smidgen better, taking a pass on the daily cemetery visit in order to obsesses over a national “news” story, about a “killer” bride. But when Mellie all but calls a cabinet meeting in the name of cracking this mystery — which just hours earlier had been resolved — we (and Fitz) see the wind come back out of her sails.

Fitz’s other main concern for the hour was the Elliot Gun Control Act, which was in danger of getting — and ultimately did get — roadblocked. Summoning recently anointed AG David into the Oval Office, Fitz speaks of how he needs his administration to mean something, even if it’s that wackos can no longer shoot up schools with AK47s. Having gotten a taste of POTUS’ “bubble” and liked it, Rosen uses a B613 file to “convince” the problematic judge to reverse his stance. That move earns David cheers from Fitz & Co., though it came with a price: the judge later killed himself.

The president’s good mood also was good for (G)Abby, who when invited into the Oval for some Scotch saw an opportunity to tactfully but rightly chide him for not knowing her name. Fitz apologizes, then pumps Abby for intel on Liv, whom she claims is “good” — though Abby truly doesn’t know, as their already fractured friendship took another hit this week.

Olivia’s two priorities this week were 1) getting Jake to have dinner with her and her dad, at Command’s house, and 2) helping college pal Catherine Winslow (Lost‘s Sonya Walger) find her MIA teen daughter. But when Huck discovers that Catherine was shtupping her kid’s 17-year-old boyfriend, which the daughter then threatened to reveal to her dad, Liv races to the teen’s hotel hideaway, but is too late. Young Caitlin is dead, though Catherine insists she had no hand in it. Even so, Cathrine ends up arrested. It is when Abby stops by to ask Liv about their mutual college friend’s situation, only to get frozen out, that she sees how bad things are between her and her onetime boss.

When Jake isn’t mulling the worst dinner invite ever, hes smashing Charlie’s face into a candy machine, then taking the spook-for-hire prisoner. Charlie has but one request, in trade for all he knows: a “night with” Quinn, there in his cement-block confines. Jake comes through, and though Quinn claims indifference to her onetime lover, Charlie;s head games — about how Quinn has no people — get to “Robin,” and then eventually suck some face. Charlie’s words take on added meaning when Liv and Huck don’t even realize that Quinn was missing for 24 hours.

Cyrus and Michael the Brainless Whore On Track for an MBA kept crossing paths, until Michael finally invited the Chief of Staff to quench his thirst to replace the “dry lump” in his throat with… something else. Next thing you know, a beaming Cyrus is forking over $2,500 to Michael the next morning — after which, Michael reports back to RNC boss Liz, that all is going as planned.

And last but not least: After a sad, needy and frustrated Liv tells Jake  that she is “done,” he agrees to dinner  at Rowan’s — now having seen video footage of Secret Service agent/B613 mole Tom infect Jerry Jr. with the bacterial meningitis. All is pleasant enough (though seems like Rowan’s roasted pork was a turkey), until Olivia exits the dining room to take a call. Jake than goes for the jugular, asking Rowan why he had Harrison killed/ Because he had learned he killed Jerry Jr.s death? Hitting a nerve, Jake commands Command to get out of town pronto, and never come back, but Rowan doesn’t retreat quietly. Rather, he plunges a steak knife between Jake’s spread fingers and declares, “I’ll be the one standing over you when you die.” And as the hour ends, Jake the next day spies Rowan going about his day, all BAU.

Now that Command has called Jake’s bluff, will Jake call his?