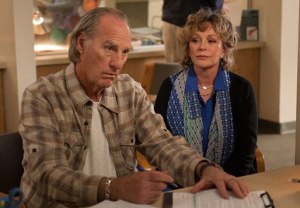 On this Thursday’s episode of Parenthood, more than one family member reminds us you can’t spell Braverman without “brave.”

Even though the family has encountered challenge after challenge for five seasons, the obstacles — both physical and emotional — presented in the NBC drama’s latest hour are some of their most harrowing yet.

Who steps up to the plate in the face of adversity? Let’s recap:

FIRST, THERE’S ZEEK…
…who is finally forced to undergo the heart surgery he’s tried so hard to avoid. Before Zeek’s surgery (and during the actual procedure), the Braverman family mantra seems to be, “It’s going to be OK.” But there are certainly chinks in the armor: Adam copes with his fears by sending out “worst case scenario” emails and remaining all too realistic about what could go wrong during Zeek’s surgery. Millie won’t let her guard down until the hour is almost over, when she chats with Julia about the significance of her wedding vows. “In good times and bad, for richer and for poorer. We’ve been through all that,” Millie admits. “It’s this one. This is the tough one.”

And even though he puts on a good poker face prior to going in for surgery, Zeek admits to his wife that he’s scared just before he’s brought into the operating room. So scared, in fact, that he won’t take off his wedding ring until he absolutely has to. But the family’s fears are (mostly) calmed when Zeek’s doctor reports that everything went well. Millie and the kids are able to visit Zeek in his room, but only Millie actually enters — and places his wedding band back on his finger. (Please allow me one use of the phrase “I can’t even,” to be cashed in now. Zeek and Millie certainly have lived out the highs and lows of their wedding vows, and watching her put that ring on his finger got me more than a little choked up. On a related note: Might I be too invested in the lives of these characters? Decide in the comments.)

Also showing a different kind of bravery in this episode: Crosby, who gets into a motorcycle accident while en route to stop Oliver Rome’s latest hissy fit, then returns to the hospital without breathing a word of his obvious injuries. (Side note: I can’t be the only one who thought Crosby’s accident was going to be fatal, right?)

THERE’S AMBER…
…who decides to visit Ryan in Wyoming and tell him about her pregnancy in person. Drew goes with her, and for good reason. When Ryan is overjoyed about the baby news, causing Amber to want to stay in Wyoming and figure things out with him, Drew calls it like he sees it and admits Ryan is still a mess — just like their dad. At first, Amber seems like she’s tuned out her brother’s honesty, but when she asks Ryan about his pill-popping habit and realizes he hasn’t taken any steps toward recovery, she sadly confesses that he’s not ready to be a full-time dad just yet. (And although Ryan definitely isn’t in any shape to be a father, watching him and Amber slowly distance themselves on his couch is a gut-wrenching visual.)

THERE’S SARAH…
…who watches Hank’s daughter shoplift a tube of lipstick and immediately tells him about it. (I know that teenagers will be teenagers, but Ruby infuriates me. That backhanded comment about Sarah’s age was cold.) Hank admits he “sucks at being a parent” when Sarah tells him what happened, but Sandy argues that he’s not a parent at all. She confesses that Ruby has been stealing frequently (among other things), and says in no uncertain terms that she doesn’t want Sarah around when Ruby’s over for the weekend — which will probably go well!

AND THERE’S JULIA…
…who finally admits to Joel that she’s seeing someone. (I’m not happy with this development at all, but it’s a courageous move on Julia’s part, nonetheless.) Joel is visibly crushed by the news, especially after he makes an effort to visit Zeek and comfort Julia about her dad’s surgery. But none of this has deterred Julia’s new beau Chris, who may or may not still be in love with her from back in their law school days. He remembers the tiniest details about their dates and sends her a waiting-room survival package brimming with Twizzlers. (The sad truth: He’s a little charming. Thoughts on having #TeamJoel and #TeamChris T-shirts manufactured? Is that too much?)

So, what did you think of the episode? Hit the comments with your thoughts!