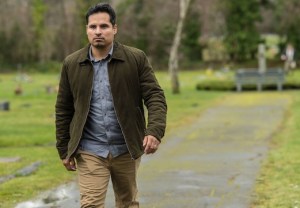 “Anybody’s capable of murder — given the right circumstances.”

I’m not entirely sure that’s true, but David Tennant’s grizzled Gracepoint Det. Emmett Carver sure makes it sound convincing. And given that it’s not his first time working a homicide — and that Fox’s 10-episode “event series” is (as the old Sarah McLachlan song goes) “building a mystery” — I’ll resist seconding the weary incredulity of Anna Gunn’s Det. Ellie Miller, Carver’s partner (aka the woman who thought she was getting his job): “That’s what you have to teach me?”

Whodunits, after all, are more addictive when every picayune detail must be carefully observed and catalogued. Is Nick Nolte’s Old Man of the Sea a little memory-challenged or downright deceptive? (And why, with the town on high alert, is he skulking around the playground of all places?) How dark a secret is Mark carrying that he’s dropping lies like a McDonald’s serving fries instead of making every effort to help catch his son’s killer? Is the dour cleaning lady at the RV park hoarding Danny’s skateboard for resale purposes or could she be part of a coverup? And who’s the little girl smiling out of Carver’s wallet — his own kid or some prior victim to whom he failed to bring justice?

Let’s do a quick recap of the action in “Episode 2”:

* Ellie kicks off the hour comforting her adorable (and unbeknownst to her, rather shifty) son Tom, who’s just woken from a nightmare in which he was calling his murdered BFF’s name. “Everything’s gonna be just fine,” she tells him — a common (and perhaps poorly chosen?) refrain for our people-pleasing cop. Interesting, though, that her child isn’t so shaken that he forgets to ask if she can be in the room when he’s inevitably questioned by her colleagues, eh?

* Renee, the ambitious young reporter from the San Francisco Globe, makes nice with the local reporter kid, the victim’s sister, the local innkeeper, but isn’t so lucky with Carver — who remembers her from his last (semi-disgraced) gig. In fact, shortly after their encounter, Carver suffers some sort of panic attack (or is it a drug withdrawal?) that’s only calmed by a syringe to the thigh in a cramped bathroom stall. We later learn (via Renee’s conversation with the local cub reporter) that Carver’s last gig involved some questionable police work — and three missing girls, “Nina, Sydney and Megan.” And yep, Carver’s got a picture of an adorable blonde moppet in his wallet — but is it a product of guilt from that botched investigation (let’s not forget, though, that he said in Episode 1 he was “exonerated”) or perhaps his own child from whom he’s now separated in the wake of his exodus to Gracepoint?

* Jack Reinhart, kayak rental specialist, calls Ellie and Carver back to Whale Watch Central after “recalling” he’d seen Danny some 10-14 days prior, out near the overlook, getting chummy with a backpacker type.

* The phone repair guy at Gracepoint Police HQ suddenly engages Ellie and Carver with intel from the Psychic Newswire: He’s been told there’s a water-y element to the case. “It’s like [Danny] was in a boat — or put in a boat,” he says, adding that the communique is from Danny himself. Carver goes ballistic, calls the guy a crackpot, but then the interloper adds, “She says she forgives you — about the pendant.” And suddenly I can hear C&C Music Factory’s “Things That Make You Go Hmmm…” in my head.

* Ellie and Carver get “elimination prints” from Danny’s family — which leads to the very uncomfortable revelation that Danny’s body “is the most valuable piece of evidence we have” (in other words, they can’t bury him ’til someone is nailed for the crime). Shortly thereafter, everybody begins acting suspiciously:

– The family cooks up a list of possible suspects. “These people are all your friends,” replies Ellie, horrified. Carver wonders if it’s a means of throwing the police off the family’s trail, but when Ellie replies that the Solanos would never hurt their youngest, he insists she needs to start learning how to stop trusting her friends and neighbors — and looking at everybody as a suspect.

– CSIs find $500 in cash taped under Danny’s bed, and a small baggie of cocaine under sister Chloe’s floorboard. Turns out the 15-year-old gal procured it for Innkeeper Gemma, who was trying to score it for some wealthy guests. When Ellie assures Gemma that “we’ll try to keep [the drug crime] quiet,” though, Carver is infuriated, telling her she ought to keep the pressure on any possible suspects. “You can keep your brooding, ass-aholic, big-city cop act to yourself!” says Ellie, finally taking the direct approach to her gruff new overlord. And then, after a good five second pause, she adds a flawless, conciliatory, “Sir.” (#Priceless!)

– Danny’s mom Beth practically collapses with grief during a trip to the supermarket, then gets comforted by the local priest, with whom she clearly shares some sort of romantic teenage past. His, “Can I give you a hug?” may be the episode’s hair-on-neck-standing-est moment — somehow, the formality of it, in the face of her grief, seems all wrong. And her admission that she’s pregnant — and nobody knows — is the hour’s biggest surprise. After the good padre gives an interview to the local news about how the community must stay strong in the face of tragedy, Mark goes ballistic, pinning the dude to the wall and telling him to steer clear of his wife. Whoa!

– Forensic investigators unearth Danny’s calendar, peppered with cryptic notes like, “Enough of this – time to quit”; “Dad’s gonna kill me now”; and “I think I know what he’s doing: What am I doing?” Clearly, this 12-year-old got himself into some type of situation before his death — but is it the cause of his demise, or just another misdirect? 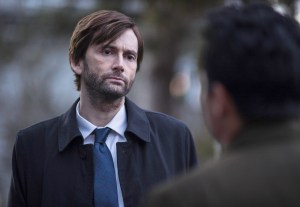 – Maybe, though, Mark’s real anger stems from a percolating sense of guilt — because quite clearly, there’s a fire ant in the picnic that is his alibi. Footage from a security cam outside the overlook shows him at 10:33 on the night of the murder, clearly waiting for a meet-up — but Mark lies and says he was on a job. When Carver unravels Mark’s story, he shifts gears, says he was with “a friend” — a friend he can’t name, won’t name, can’t recall. CSIs sweep the little cabin up near Harvey Ridge and find traces of Danny’s blood — despite a carefully cleaned-up crime scene. Oh, and there’s two other bits of evidence: Size 6 child’s footprints around the cabin, and Mark’s fingerprints. Rated D… for dun-DUN-DUNNN!

Sure, Mark’s probably not the killer — my money is still on some kind of extramarital affair he can’t bear to admit to in the wake of his wife’s grief/son’s death — since he’s the first suspect at bat, but it doesn’t bode well.

What theories do you have about Gracepoint, Episode 2? Who’s behaving most suspiciously? (I’m going with the reverend, the lady with the dog, and Det. Carver himself. Sound off in the comments with your thoughts!