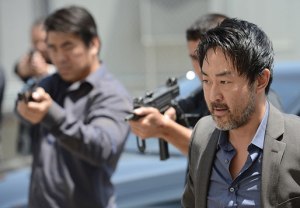 As the old adage goes, revenge is a dish best served on the side of the road.

Uh… that is how the old saying goes, right? At the very least, it was the point driven home by Tuesday’s Sons of Anarchy, which found more than one villain getting their comeuppance right there in the street. One of them with slightly more bloodshed.

Though I do have a confession to make before we go over the specifics of “Some Strange Eruption”: Midway through the FX drama’s latest hour, I found myself growing a bit skeptical of the road map for Sons‘ final ride. I’m not naive enough to think that Jax will learn of Tara’s true killer any sooner than the final episode of the series — if he ever does, that is. I’m aware that there will be a few detours before we get to the destination.

But I also couldn’t help wondering just how much longer Jax and SAMCRO will seek revenge on the Chinese for a crime they didn’t commit. Plus, I’m surprised at how little we’ve seen Jury and the Indian Hills gang, given how integral a role they played in the gun delivery that’s set this season’s events in motion.

Now that tonight’s episode is over, however, I’m firmly on board with the roads Kurt Sutter & Co. are taking us on. Before I get your thoughts on Tuesday’s eventful hour, let’s briefly go over the episode’s finer points:

CHINESE FEUD | Following Lin’s hit on Diosa, an incredibly solemn atmosphere has overtaken SAMCRO and their businesses. And in the sheriff’s department, that melancholy comes with an added dose of confusion, as Jarry and her officers try to piece together who may be behind the massacre. Despite her numerous attempts to get SAMCRO cooperating, the club won’t breathe a word to Jarry — not even Chibs at the moment, even if he is cooperating with her, ahem, privately. (Wink wink. Nudge nudge.)

Meanwhile, Jax and the club are already plotting their retaliation against Lin — not just for the hit on Diosa, but for the murder of Tara that they still believe Lin ordered. The first item on their agenda: Tracking down Barosky’s associate Desmond, who accepted money from Lin that would keep him away from the Stockton warehouse and make it easy for the Chinese to (a) steal back their guns and (2) kill fallen SAMCRO brother West in the process. (The way that SAMCRO actually gets this information out of Desmond makes me both squirm with uneasiness and cackle with laughter. Not since American Pie has a flute held so much significance.)

Nero — whose life Lin has since threatened, as well as the safety of Nero’s son — is briefly furious with Jax for lying to him about SAMCRO’s mess with the Chinese. But after Jax admits that it was Lin who ordered the hit on Tara — feel free to add air quotes to that sentence as you read it, because it is frustratingly false — Nero is back on board with the club. He convinces Lin and his associates to meet up with Jax and Chibs, in order to get their heroin back and blow SAMCRO away while they’re at it. But the meeting in question is really a set-up, which gets Lin’s men arrested by Barosky’s crooked cop friends, and gives Jax a chance to beat Lin senseless for what he did to Tara. (Of course, Lin’s insistence that he had nothing to do with Tara’s death doesn’t faze Jax any.)

Unfortunately, Jax isn’t able to completely wipe Lin off his radar. After Gemma confesses to Unser that it was the Chinese who “killed” Tara and likely attacked Diosa, Unser urges Jarry to get the real cops on Lin’s tail. When SAMCRO hears there’s a SWAT team in the vicinity, they quickly flee the scene before Jax can do any more damage to Lin’s cranium — but Lin and his men are still arrested on multiple gun and drug charges, giving us the hour’s first side-of-the-road triumph. (I use that term very loosely, mind you.)

ROCKY ROAD | Meanwhile, Juice is forced to stay in his motel room for one more night while Gemma helps with the situation at Diosa. Shortly after spying a newspaper headline that tells of the Diosa attack, Juice encounters a Chinese motel employee who attempts to follow Juice into his room (considering Juice has technically overstayed his welcome). When the employee returns a few hours later with a set of master keys that gets him into Juice’s room, Juice mistakes him for one of Lin’s men and shoots him. And shoots him. And shoots him some more. (There’s a particularly gruesome shot of the final damage, and boy, it’s not pretty.)

Finally, Gemma is able to leave town with Juice, with the initial intention of taking him to her dad’s place for safety. But while Juice sleeps in the passenger seat, Gemma decides to take a different route — one that seemingly involves using the gun in her purse to off Juice in the middle of nowhere. When Juice wakes up, Gemma feeds him quite a few lies about their new destination —  most obvious fib: that Nero, of all people, is meeting Gemma and Juice halfway to assist with the relocation. In what world, Gemma? — and Juice knows instantly that she’s full of it. Gemma tries to grab her gun before Juice can get to it, but they swerve off the road and Juice gets to the weapon first. As he aims the gun at Gemma (and I literally shift up to the edge of my seat), Gemma begs for mercy, explaining that she just couldn’t trust Juice to keep her ultimate sin a secret. Juice doesn’t pull the trigger just yet, but next week’s hour is sure to come out of the gate swinging.

OK, your turn. What did you think of the episode? Are you a little concerned about Abel these days? Sound off in the comments!