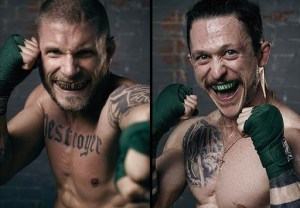 On Parenthood, Matt Lauria and Jonathan Tucker at separate times fought for Amber Holt’s heart. Now the actors are fighting on a whole other level on DirecTV’s Kingdom, which premieres Wednesday at 9/8c.

TVLine met up with Lauria and Tucker following the Kingdom cast’s appearance at the Television Critics Association press tour to get inside their flawed fighters’ heads and engage in some Parenthood-related smack-talking.

TVLINE | That was quite a TCA panel. Much genuine enthusiasm up on stage.
MATT LAURIA | I have to say, there’s almost a feverish pursuit of trying to achieve something with this, trying to tell the truth as true as we can, trying to keep it pure and human — in the same way that you approach a fight. And if you don’t put the work in, you’re going to get knocked out.
JONATHAN TUCKER | [To Matt] That was good, I loved that. I’m going to steal all of it, thanks.

TVLINE | Matt, why did things go south for your character, Ryan Wheeler, years ago?

LAURIA | He had achieved a level of superstardom that you can’t imagine. When you think about Mike Tyson, everyone gave him flak about the assorted troubles that he ran into, but if you’re 20 years old and you realize, “I’m the heavyweight champ and I can kick any man’s ass on this planet,” it’s a lot to handle, emotionally and maturity-wise. To be a man like my character, who is a Mozart of fighting, to feel that invincible…. along with that came a lot of demons. There was a lot of drug abuse and drinking and hookers, the whole nine yards. He’s a decent and good man who ends up making some really bad choices and totally spiraling downward.

TVLINE | Kiele Sanchez told me that Ryan did something pretty awful, right in front of Lisa, that basically was the last straw for her.
LAURIA | It’s traumatic. And we probably shouldn’t mention what it was. But yeah, I end up in jail for four years, and when I come out there’s this contrast of someone who’s attempting to be more contrite and penitent and is trying to rebuild, but ultimately I think that the obstacles of life — even when you’re trying to put the best intentions into practice –hit you in the face. Ultimately the man is who the man is.

TVLINE | Jonathan, was Jay pressured to follow in his father’s footsteps, or was he naturally drawn to MMA? 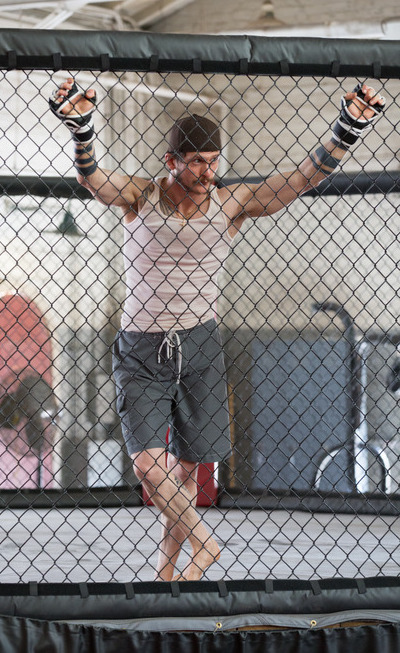 TUCKER | I think it’s a bit of like “the shoemaker’s son” — we grew up in that world, and he was somewhat reluctant to fully indulge in it. But it’s also the only thing that ever provided discipline for Jay, and that discipline in turn gives him self-confidence and keeps him away from his addictions and his ego. But with that kind of triumvirate, when you knock out one, the other two get askew. I need to have some place to focus, and [MMA fighting] has been the only thing I’ve ever known, that I’m actually good at. Ryan acts as a foil in that respect — he shows me how much potential there has been and how much I’ve squandered, and that ends up sending me into a darker place.

TVLINE | The press kit calls Jay a “live wire,” and in the trailer he’s waving a gun around….
TUCKER | My father (Alvey, played by Grillo) has an understanding of what he thinks it means to be a father, and it’s fundamentally perverted, in the sense that it’s not about just being able to physically protect your family. That doesn’t make you a father, and it doesn’t ultimately make you a man, either. You need to provide other things, other nourishment, and he never did.

TVLINE | As a result, Jay has a beef with Dad?
TUCKER | He does, and so does my younger brother Nate (played by Jonas), and so does my mom (played by Going). Alvey is wrestling with his own demons as well, and they are extraordinary. Maybe there is guilt stemming from what happened with my mother, which he caused, and what ends up happening with my younger brother in the pilot. And he’s responsible for what happens to me. So, we have a pretty legitimate beef; he wasn’t the father that he should have been, and he has never apologized for it.
LAURIA | And he stole my girl!

TVLINE | Speaking of which: Now that Ryan has resurfaced, what are his intentions toward Lisa?
LAURIA | When you’re sitting in a cell for four years, and you’re trying to figure out what you would do differently…. Man, there’s just so much I can’t tell you about his experience in jail. But…

TVLINE | Well, is Ryan back to fight, or back for her? Or a little of both?
LAURIA | When I come out, you’ll see that I try to avoid [Lisa], because it’s horrifying to have perspective on what I did, how many lives I ruined — including my own. There’s the horror of the world that is so familiar to me and feels so good, like a home, being a thing that could trigger me to become such a monster.

TVLINE | It’s perhaps almost the last place in the world wanted go back to, in some ways.
LAURIA | Yeah. But the gym is struggling, and to Alvey a fighter like me is one in a million. [Ryan] can make a gym, he can make the name of a coach, he can bring in money and recognition. So there’s an appeal there. And obviously there’s an appeal for me, that Lisa’s there. There are so many twists and turns, but it’s safe to say that high on the list of things he wants to accomplish in this new stab at life is to at least show her that he’s a new man.

TVLINE | And is there anything on the romantic front for Jay?
TUCKER| [Laughs] Part of the addiction for him is sex, so…. When he’s out of the [MMA game], sex takes on a different meaning for him. It fulfills that void. Until I’m able to get my life back together, which ultimately means getting back to fighting, any real relationship is unattainable.

TVLINE | Matt, is there any sense if you’ll be back for Parenthood’s final season? [Lauria’s return as Ryan was confirmed 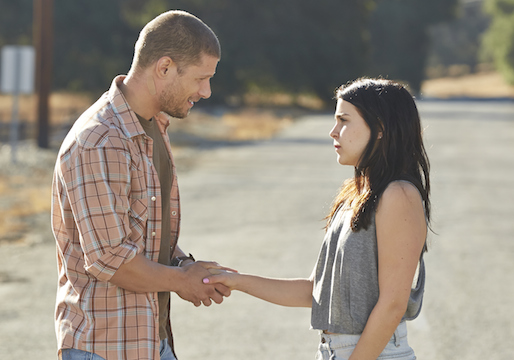 shortly after this interview; he appears in this Thursday’s episode.]
LAURIA | I would love to, I would absolutely love to. It ended in an open way, so…
TUCKER | You must think, though, that Bob Little – who is now Mayor Bob Little – is probably going to be able to take back Amber, now that a few years have passed.

TVLINE | Maybe they can “fight” it out, MMA-style?
TUCKER | [Feigning bravado] Oh, I don’t even think Mayor Bob needs to fight. Bob’s got the upper hand at this point.
LAURIA | [To Jonathan] Let’s talk about the woman on the plane….
TUCKER | Oh, this is good: We’re sitting on a plane and the woman next to me points to Matt and whispers, “Is he an actor?”
LAURIA | She’s sitting next to Tucker, and I’m across the aisle…. He’s all bruised and bandaged from a fight, his beard is grown out….
TUCKER | Now, I hate talking about myself but I love selling my friends down the river, so I go, “Ohhh yeah. Oh yeah.” And the lady asks, “What is he in?…. Is it Parenthood?” I’m like, “Ding-ding!” She says, “Oh my gosh, he was incredible.” I ask her, “So you’ve seen all the episodes?” and she goes, “Oh yes, I have every single one on TiVo, I follow it religiously.” And I say, “I’ve got to tell you, my favorite character is that Bob Little,” and she goes, “Uck! I didn’t like him.” I’m like, “What?! But he was so charming!” And she says, “He was a little charming, but I don’t like what he did with Amber. But that guy, Ryan? He’s great.” [Laughs]