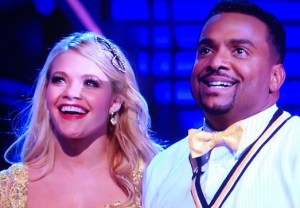 It’s only just Week 4 of Dancing With the Stars, and that means there’s still a relative glut of challengers (Tommy Chong, Michael Waltrip, and Betsey Johnson, to be specific) still heroically but hopelessly clinging to those confetti-soaked Mirrorball dreams.

But even without the specter of a shocking elimination, Monday’s live show still managed to assault our senses (and occasionally our tear ducts) as the 10 remaining celebs strutted their stuff to express the joy and/or heartbreak of their “Most Memorable Year.”

In addition to a moving performance of “Try” by Colbie Caillat (during Bethany Mota’s inspiring rumba), tonight’s show also featured a historic DWTS first: viewers were able to raise their digital paddles and score each dance (on ABC.com) right along with the judges. “America” gets my vote as the best guest judge of all time!

DANCE OF THE NIGHT: Alfonso Ribeiro and pro Witney Carson: Can you still hear that roar in the ballroom? We’ve all been waiting for Alfonso to bring “The Carlton” — his iconic “Fresh Prince of Bel Air” dance – to the ballroom, and wow, did he bring it! His joyful, highly infectious jazz-infused version was pure perfection. With this dynamic performance, Julianne said he’s “separated himself” from his famous Carlton character once and for all. Bruno excitedly called it, “Broadway standard jaaaaazz!” while Carrie Ann summed it up best: “This is what we’ve been waiting for … all I can say is, finally!” The dance earned the only all-perfect scores of the night.

RUNNER-UP FOR DANCE OF THE NIGHT: Lea Thompson and pro Artem Chigvintsev: Have we found another Mirrorball contender? Lea’s highly emotional contemporary dance (in memory of her father, who died of cancer in 2003) brought out tears (and raves) from the judges. “I will remember that dance forever,” said a clearly moved Carrie Ann, while Julianne complimented her perfectly pointed toes and the dance’s highly emotional wallop. Bruno praised her “exceptional quality of movement,” before concluding, “You are an exquisite performer.” A trio of perfect 10’s from the judges was spoiled only slightly by a mere “9” from America.

MOST CRIMINALLY UNDERSCORED: Jonathan Bennett and pro Allison Holker: OK, the Mean Girls star’s “Jingle Bell Rock”-fused samba was far from perfect (“How much Christmas punch have you had?” mused Bruno, before adding, “not enough.”), and admittedly the dance lacked elegance and technique (“it’s all kind of just erratic,” noted Julianne), but for pure entertainment value alone, wasn’t it better than the feeble row of 6s it garnered from the judges (that includes you, America!)?

WORST OF THE NIGHT: Michael Waltrip and pro Emma Slater: The agonizing pain in the judge’s voices summed up this quickstep-gone-very-wrong disaster: “You’re trying so hard,” lamented Bruno, before adding this zinger: “You went wrong so many times, sweetheart.” At least Carrie Ann (“Inside I’m crying”) was more charitable than Julianne, who somehow compared Michael’s frame to a deodorant commercial. Miraculously, the dance still earned a trio of 6s and a gift-wrapped 7 from America. But hearing Bruno call Michael “sweetheart” somehow made it all worthwhile.

And with that, it’s your turn. Which couple should have really gone home tonight? Or was it Betsey’s time? Are you excited for the “Switch Up” next week? Sound off in the comments!