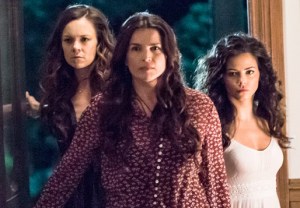 Now that‘s how you end a season!

Lifetime’s Witches of East End wrapped its sophomore outing on Sunday with one devastating battle, two major deaths and more twists than you could shake a broomstick at.

First, a quick recap: After defeating the King, Wendy gave up her last life to revive Tommy; Ingrid confirmed her pregnancy with a test; Frederick was killed by a unidentified witch hunter; Dash was arrested for murder, then secretly switched bodies with Killian; and, lastly, Wendy reunited with her other sister Helena in the Underworld.

Below, executive producer Maggie Friedman explains the finale’s biggest twists, then previews what we can expect should Lifetime grant this incredibly deserving show a third season:

TVLINE | Let’s start with Ingrid. Holy crap. Are we getting a “Who’s the Daddy: Dash or Mandragora” storyline?
Yes, exactly. She doesn’t know, so that’s going to be a big mystery when (I hope) we begin Season 3. That’s something Ingrid will have to deal with: Who’s the father of this baby?

TVLINE | Does her family even know she had sex with Dash?
No! And that’s another thing. There was tension between her and Freya already, and that’s just when Ingrid went on a date with Dash; nobody knows she had sex with him, too. That will be an interesting reckoning, as well. TVLINE | Was it always your plan from the beginning of the season to get Ingrid pregnant?
Yes. From the very beginning, we knew we wanted Ingrid to get pregnant. We were on the fence about how far along she would get during this season, and we decided to save it. But yes, we knew it was coming. It felt so natural, given everything she’s been through this year, to throw that complication at her.

TVLINE | Moving to potential baby daddy Dash, who is just the worst, what’s his endgame?
Well, that’ll have to unfold in Season 3. It’s interesting because he’s been very bitter to Freya, but on the other hand, she jilted him and he did love her. So he has a very good opportunity to really f—k with her while she doesn’t know who he is.

TVLINE | And the King — is he dead dead? Or is he just gone for now?
You never know with this show, obviously, but his spirit was driven away and vanquished. We can do any number of things, which is the beauty of magic. For now, let’s say he’s dead; we have other villains to deal with in the future, and there will be some formidable opponents coming up.

TVLINE | One of those being the woman who killed Frederick. Am I crazy for assuming that was Raven?
I’m not allowed to say, but someone did murder Frederick and write “Death to witches” in his blood. So let’s just say there’s a witch hunter out there who’s going to cause some problems for the family. I leave it up to you to infer whose boots those were.

TVLINE | Whether that was Raven or not, I want to see more of her in the future. The scenes between her and Dash were ridiculous and so fun to watch.
I know! [Eric Winter and Sarah Lancaster] actually know each other in real life, so they felt very comfortable. They had so much fun with it, and it was great to see that side of Dash coming out. I mean, he’s a stud, what can I say? Plus, she’s a badass! I love Raven. TVLINE | OK, now let’s talk about that final shot of Wendy.
We shot that outside at like two in the morning. They built this huge pool with flame bars around it, and it was so cool to watch that sequence. Mädchen looked gorgeous, of course.

TVLINE | And we’re finally meeting the other sister!
Yes, her name is Helena and she lives hell, don’t ya know. We almost called the finale “Highway to Helena,” but we didn’t. [Editor’s note: They should have.] She’s the Gatherer! We set it up in Episode 2 this season, when Ingrid found that book with all of the women in it — Ingrid’s the Key, Freya’s the Traveler, Joanna’s the Dagger and Wendy’s the Bridge — and then she saw a veiled face that said “the Gatherer.” She didn’t know who it was, but it’s Helena; she lives in the Underworld and she gathers souls. She’s Wendy and Joanna’s sister.

TVLINE | Let’s say we move into a third season; do you have any actresses in your head for Helena?
Ooohh yes. There’s an actress we would reference in the writers’ room a lot when we would talk about this character, and who we’d want her to be, should we be so lucky as to have a Season 3. We’re not sure if we could get her, but the great thing is that there are so many amazing actresses in Julia and Mädchen’s peer group who would be fabulous. It’s going to be a fun role, so I hope we’re able to write it!

TVLINE | How do you envision that reunion going between Wendy and Helena?
Wendy’s going to get tested down there. It’s going to be a tough journey for her as she resolves some things with her sister. I think it’s going to be really fun. We have a lot of cool ideas about how the family is going to go on and what they’re going to do.

Witches fans, who do you think murdered Frederick? Who’s the father of Ingrid’s baby? Who should play Helena? There’s so much to discuss, so browse photos from the finale, then drop a comment with your thoughts and reactions. 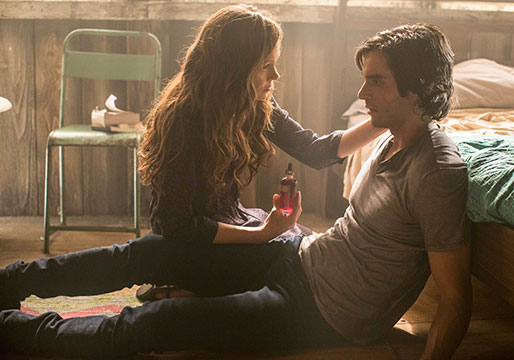