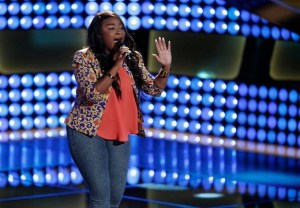 Oh dear. I am so sorry to begin this recap of The Voice‘s fourth round of Season 7 Blind Auditions with an all-caps rant, but come on, I’m not the only one who finds himself shouting and gesticulating wildly when Gwen, Pharrell, Adam and Blake ignore winning PowerBall tickets falling from heaven, am I?

And by “winning PowerBall tickets,” of course, I mean serious contenders like Toia Jones and Amanda Lee Peers, who tonight had to settle for two- and one-chair turns, respectively, while far less convincing vocalists this season have found themselves the object of four coaches’ affections.

Such are the drawbacks of getting overly invested too early in the game in a reality singing competition. On the plus side, though, with Pharrell (currently the most charming man on the planet) and Gwen (cotton candy in human form), there hasn’t been a zero-chair turn that’d made me drop to my knees, shake a fist at the sky and scream “NOOOOOO!” (As I proofread this recap, I realize my husband deserves a really nice vacation at the end of the year).

Enough about my home life, though, let’s count down the nine vocalists who advanced tonight to the Season 7 Battle Rounds — in order from least- to most-promising — with a little review in a Twitter-esque 140 characters or less. (Yes, three other folks also advanced via the dreaded montage – but there was barely enough time to register their names, let alone what they were singing.) And also, let me just say even tonight’s seventh-best singer would’ve been Top 3 material on Monday night’s show: 9. Tanner Linford, “When You Say Nothing at All” (Team Blake) | Wide-eyed teen got rejected in Season 6, and was not any discernibly stronger this time around. Moral of the story: Adorableness does not a viable singer make.

8. Katriz Trinidad, “At Last” (Team Pharrell) | Silly 15-year-old, “At Last” is for grown women! Sure, Katriz hit all the notes, but there was no yearning or joy underneath the technical proficiency. Four chairs for THIS? No. (This, on the other hand, gets ALL THE CHAIRS.)

7. Jean Kelly, “Already Gone” (Team Gwen) | Saucy dame struck some massive notes and displayed a sweet upper register on Kelly Clarkson’s angsty ballad. It’s just a shame Jean didn’t do more to differentiate her rendition from the original. (Also: How did no one on the panel ask her about her name? D’oh!)

6. Ethan Butler, “Beneath Your Beautiful” (Team Adam) | Brought a buttery tone to a song that I kinda can’t tolerate, but he’ll need a little more inner fire if he wants to burn his way through to the live rounds.

5. Craig Wayne Boyd, “The Whiskey Ain’t Workin'” (Team Blake) | Dated fringe jacket aside, Craig delivered his country jam with a gritty authenticity that made it clear he’d probably knocked back the beverage in his song title more than a couple of times. Could be a sleeper if Blake treats him as more than cannon fodder for his army of precocious teenagers.

4. Jonathan Wyndham, “Say Something” (Team Adam) | Ridiculously handsome fella’s hands were noticeably trembling as he finished this done-to-death ballad with all four judges facing him. He’s got a pleasingly earthy tone and an ability to bring a song’s lyrics to vivid life, but he’s going to have to get those nerves in check — stat!

3. Amanda Lee Peers, “Put the Gun Down” (Team Gwen) | True confession: I wasn’t familiar with the ZZ Ward song that Amanda chose to cover — but it proves she’s got great taste in music. And while her diction could use a little improvement, that husky rocker growl and undeniable soul deserved more than a single-chair turn.

2. Chris Jamison, “Gravity” (Team Adam) | Adam’s comment that Chris did too much with his voice on this John Mayer cover was nonsense — and I’m glad his three coaching counterparts dismissed it accordingly. Chris has incredible range and a variety of textures to his instrument — he can shift from growl to falsetto without ever making it look like work — and as Gwen noted, he’s really cute, to boot. The only thing hindering him, from a competitive standpoint, is that his Big Sad Backstory is being relegated to playing the Pepper Shaker in a 10th-grade production of Beauty and the Beast. I mean, Mark Burnett & Co. love human tragedy and insurmountable obstacles more than they do incredible vocal performances. There are only so many tear ducts they can activate via that Pepper Shaker pic.

1. Toia Jones, “One and Only” (Team Pharrell) | Toia imbued Adele’s epic love ballad with an almost religious fervor — and yet chose her ad-libs and runs with the careful precision of a trained pro who’s in complete control of the stage, the voice, the mood of the performance. She’s got an immediately recognizable tone, impeccable phrasing and a great sense of humor to boot (telling Carson he could book her for his next event made me LOL). I just hope the fact that she was only a two-chair turn doesn’t sway Pharrell away from the idea that she’s a true gem — with a legit chance to win.

On that note, then I pass the mic to you. Who were your favorites from Season 7 Episode 3? Did you find this episode vastly superior to Monday’s? Take our polls below, then sound off in the comments!