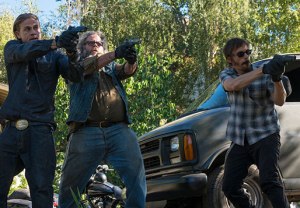 Who knew Sons of Anarchy could get so poignant?

During a moment of crisis for SAMCRO on Tuesday’s episode of the FX drama, Bobby reflects on the club’s good ol’ days: “Remember when our biggest problem was which Mayan to kill?” Jax insists those were simpler times, but Bobby takes it a step further: “Simpler men.”

That statement seems particularly fitting for this week’s installment, which finds the motorcycle club getting into hot water with multiple allies — and realizing there’s very few places left to turn. Without further ado, here’s what went down on “Poor Little Lambs”:

NO GOOD DEED | SAMCRO’s Problem of the Week stems from Pastor Jonathan Haddem, the, uh, sexually promiscuous (for lack of a better term) preacher who the club unwittingly murdered a few weeks back. Tyler informs Jax and his brothers that Haddem was actually a potential business partner for August Marks, as the two men hoped to make headway on a low-income housing project. But now that the preacher is MIA, it’s up to SAMCRO to track down his wife, who has power of attorney and could also sign the papers that will move the project forward. The club’s first move? Digging up the dearly departed preacher, who was buried with his phone. At first, it doesn’t seem that the phone carries any useful intel, until they find a video of Haddem getting extra-freaky in the sheets with… none other than Venus! (Welcome back, Walton Goggins. You’ve never looked more beautiful.)

Venus recalls a particular rendezvous with Haddem at his lake house, which SAMCRO immediately visits. They manage to track down Haddem’s wife and stepson (though Tig is shot and wounded in the process), and Haddem’s wife confesses that those low-income housing units? They’re all a front for money laundering. But she’s backed into a corner and forced to sign the papers, realizing that any other moves would cause August Marks’ men to come for her and her son.

You know Newton’s Third Law of Motion? For every action, there is an equal and opposite reaction? Well, that’s what seems to take place after SAMCRO cleans up the preacher’s mess. On their way to Business Transaction No. 2 — a drug deal with some of Ron Tully’s men — Jax and the boys are tailed by two officers in the sheriff’s department, who are hoping to track them down for information on Kenneth Haas’ recent trip to the hospital. The officers realize they’ve followed SAMCRO to the heart of something dangerous, and when Tully’s men think SAMCRO brought the police with them, they gun down both officers. (Cane is shot fatally; Eglee, as we see later, is hanging on by a thread.)

A-DIOSA! | Later, Jarry stops by Scoops to ask Jax, Bobby and Chibs if they had anything to do with her colleagues getting shot. They deny all involvement in the dust-up, but just as Jax confesses to beating up Ken Haas, one of Lin’s men throws a hand grenade through the window, blowing up the ice cream shop (without wounding Jarry or the Sons, though). Bobby observes that SAMCRO must have been sold out to Lin (for any number of things, really) to bring on such full-blown retaliation — and indeed, Lin’s revenge isn’t stopping there. A few of the Chinese stop by Diosa just as Nero reaches Scoops to check out the damage. He gets a phone call from one of Lin’s associates — “What happens at Diosa will affect you, but it’s meant for SAMCRO,” the associate warns — and by the time Jax & Co. reach the bar, Lin’s men have already killed every last woman working inside, including Colette. (And just as Gemma was warming up to her, too!)

Though most of these 75 minutes belong to SAMCRO’s fracturing business relationships, we also get an update on Juice, who’s in especially dangerous territory now that the sheriff’s department has opted to put out an APB on him. Gemma insists on driving Juice to her dad’s house to buy him some more time, but Juice breaks down at the thought of spending more time alone with his thoughts — “getting lost in the details of nothing,” he adds, breaking my heart in the process. (On a positive note? There is a glimpse of Juice’s butt early in the hour. So, it’s not an entirely depressing episode.)

Other highlights: Nero learns that Jax was the one who put Ken Haas in the hospital, and he’s not pleased to hear that Gemma put him up to it; Tig and Venus reconnect (if you know what I mean) while she nurses his gunshot wound; and we get our first glimpse of Courtney Love as Abel’s pre-school teacher. Her scene is short but memorable, as Ms. Harrison says what we’re all thinking after Gemma threatens an impatient mom in the drop-off line: “Damn, Grandma’s a little crazy.”

OK, your turn. What did you think of the episode? Might this season’s pace be dragging just a smidge? Hit the comments with your thoughts.