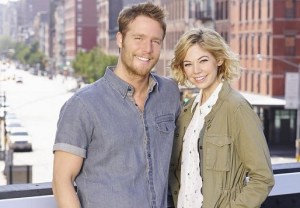 The would-be couple at the center of ABC’s Manhattan Love Story sure do spend a lot of time in their own heads. But what were you thinking as you watched the new rom-com on Tuesday night?

Before you give us your take, here’s a brief refresher of the pilot: Dana (played by Crazy, Stupid, Love‘s Analeigh Tipton) is fresh to New York City, having moved from Atlanta to finally start her publishing career. (How is publishing still a rom-com trope?) Although it appears like she’s living rent-free with her college sorority sister Amy (Californication‘s Jade Catta-Preta), there are strings attached: Amy sets up her friend with her husband David’s (Accidentally on Purpose‘s Nicolas Wright) brother. Peter is played by charming Greek and Shameless alum Jake McDorman, but his character here? Kind of a typical bro-jerk. When his half-sister asks which girl he’s going out with as they browse Amy’s photos, he replies, “The ugly one.”

Meanwhile, Dana tries to look up Peter on Facebook, but accidentally types his name in as her status update. The technology woes continue as she calls him when she meant to text, and then texts him instead of Amy about how she just made a fool of herself.

The date finally rolls around, and we can hear all of their thoughts. Things gets off to a rocky start when Peter sees Dana examining her teeth and smelling herself outside the restaurant. (Her curly bob, for the record, looks fabulous throughout.) At dinner, he checks out her boobs, which she totally calls him on. “That was feisty,” he thinks. When she laughs at his joke, his mind goes to, “Totally going back to my place! When’s the last time I washed the sheets?” Her: “He totally thinks we’re going back to his place. I hate that he’s right.”

But they don’t hit the sack together because the date abruptly ends in disaster and tears. When he makes fun of her list of New York things to do, the crappy day starts to catch up with Dana — her new coworkers hate her — and she begins crying. “Happy thoughts,” she thinks to herself. “Free wine. Pixar movies. First orgasm I didn’t give myself.” If you’re going to do continuous voice-over, more lines like that, please.

Eventually, Peter convinces Dana to go on another date, knocking two things off her list — take a pedicab, and No. 1, visit the Statue of Liberty, the sight of which brings Peter to tears. “Is he crying?” Dana thinks. “Great, just when I start to like him, turns out he’s gay.”

Nope, just experiencing real, human emotions finally. The supporting characters could definitely use some development, and the show’s voice-overs could grow tiresome if they’re not consistently zippy and clever, but Tipton and McDorman sure do make an appealing couple, don’t they?

What are your feelings on Manhattan Love Story’s thinky premiere? Grade it in our poll below, then sound off in the comments!