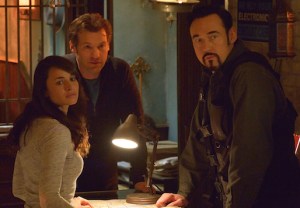 This week on FX’s The Strain, Eph had an opportunity to get the word out, Setrakian said a sad farewell, Eldritch got what he had coming to him and Gus made some new friends.

SINGING IN THE RAIN | After a two-week absence, Eichorst returned when the Master’s benefactor, Eldritch, drew ever closer to dying and thus demanded his “payment” for services rendered. Eichorst all but laughed in the old man’s face, saying that the Master is not one to pressure — that he either does, or does not. Yet by episode’s end, the Master does visit Eldritch, and with a few drops of his milky “blood” rejuvenates the old man to the point that Fitzwilliams finds his boss outside basking in the rain.

MEN IN BLACK | Gus this week had (as he does) a seemingly pointless storyline, in which he leveraged a local thug, Alonso Creem (played by The Wire‘s Jamie Hector), into hooking him up with guns. But when Gus caught wind of a very important delivery Creem was involved in, he demanded a look-see. And what he found in a shipping container on the docks was a whole buncha strigoi, obviously postmarked to infect other parts of the world. Gus and Creem put bullets into a few bald noggins, until that “rebel faction” of strigoi show up to save the day and take (specifically) Gus with them. (FWIW, the photo caption at right lists “Stephen McHattie as Quinlan.”)

PHOTOS Quotes of the Week From The Strain and Other Shows

THIS IS NOT A TEST | Shortly after Eph, Fet et al return to the pawn shop (where we were amazingly spared Zach being scolded for the cigarette run), Dutch resurfaces, and she’s got more than a plan — she’s got a win. She has a way to hack into the Emergency Broadcasting System signal, thus affording Eph 45 seconds or so to get the word out to all TVs and radios. Once it’s showtime, Eph’s speech isn’t the most polished thing in the world, and I for one wouldn’t have muddled matters with the term “turned,” but he gets out the gist of it, though as for methods of killing he only cites “sunlight” before he gets cut off. Their victory celebration is cut short though when Eichorst shows up with a few strigoi — and worse, they’re a bit handy with crowbars. During the assault, Nora’s mother gets bitten — by the goth rocker dude we’d long forgotten about. Knowing full well how this goes, Nora takes it upon herself to decapitate her mom — as Setrakian looks on, knowing full well how hard it is to euthanize a loved one in such a way. Because….

HAVE HEART | In flashbacks to Albania circa 1967, we see Setrakian on the prowl for a nest of strigoi, when he isn’t at home with his loving and in-the-loop wife Miriam. Setrakian is resolved to ridding the world of this scourge, after which he and Miriam plan to adopt a boy and a girl. But when Setrakian finds and rappels down into a well where strigoi are nesting, Eichorst shows up to reveal it as a trap, and take away his climbing rope. It’s a long, exhausting slog, but Setrakian eventually scrapes and claws his way out of the well, only to find his horse murdered. So on top of all else, he must run home, hopefully to save Miriam from Eichort’s treachery. Alas, he is too late, finding their hovel in ruins. Later, as expected, Miriam shows up turned, along with an infected boy and girl. Setrakian knows what he must do, and does it — and afterwards, he cuts Miriam’s strigoi heart out of her body. The same heart that to this day, he has kept (and fed) in that jar.

So, back in the present day, as Eichorst storms the pawn shop cellar, Setrakian says a sad farewell to the last reminder of she whom he loved, before he and the others escape out a secret exit.

What did you think of “Last Rites” aka the penultimate episode of Season 1?