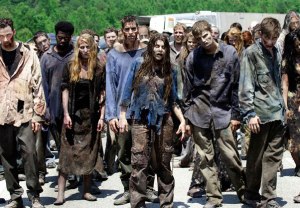 On the heels of AMC officially placing a pilot order for its Walking Dead spin-off, er, companion project, TVLine has obtained fresh intel about the six principal characters populating the potential series. And they are:

SEAN CABRERA | A Latino male in his early 40s, Sean is a good man trying to do right by everyone in his life.

NANCY TOMPKINS | A thirtysomething single mom to two kids, Nancy looks like the girl next door, but there’s an edge to her.

ASHLEY TOMPKINS | Nancy’s mostly level-headed teenage daughter. Her ambition is in direct proportion to her older brother’s failures. She loves her mom but it’s time to get out of Dodge.

ANDREA CHAPMAN | A somewhat wilted flower child, fortysomething Andrea — yep, another Andrea! — has retreated to the outskirts of the city to recover after a horrible marriage.

AMC has promised that TWD: 2.0 will shed light on a new, previously unseen corner of the zombie apocalypse — perhaps one where the living outnumber the undead.

As TVLine previously reported, there’s buzz that the offshoot — penned by showrunner Dave Erickson and TWD creator Robert Kirkman — will be a prequel of sorts, one that would chronicle the early days of the epidemic and the effort to contain it.

An AMC rep declined to comment or confirm anything beyond ordering the pilot.

Got casting tips for the six new survivors? Post ’em below!