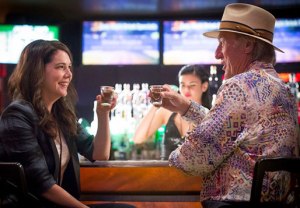 That piece of wisdom, courtesy of Amber Holt on Thursday’s season premiere of Parenthood, just about sums up the NBC dramedy’s return.

The first hour of Parenthood’s final season found the Braverman clan dealing with a number of thoroughly grown-up changes, all of them eliciting reactions ranging from, “How could she?!” to “Can someone pass the Kleenex?” Read on for a recap of “Vegas,” then tell us what you thought of the episode.

MATTERS OF THE HEART | When creator Jason Katims hinted at a huge challenge that would ripple through Parenthood’s final 13 episodes (later hinting that death was a necessary topic for the show to tackle), most of us jumped to a tragedy involving the Bravermans’ fearless leaders, Zeek and Camille. So, when Zeek collapses at a blackjack table during a birthday trip to Vegas with Sarah, it’s not entirely surprising — but it’s gut-wrenching all the same. (Lauren Graham’s line reading of, “Dad, no!” legitimately sent a chill right through me.) The hospital’s initial tests are able to rule out a heart attack, at the very least, but more exams are required to understand exactly what caused Zeek to hit the floor. In true Zeek fashion, he’s having none of it.

Rather than let the doctors poke and prod him, Zeek puts it in writing that he’s refusing the hospital’s treatment and heads right back to the craps table — this time joined by Adam and Crosby, who take a trip to Sin City when they get too worried about their dad. But even though the Braverman patriarch gets through the rest of his birthday trip unscathed, a trip to his usual doc indicates that further tests have to be done. (Or, as Adam points out in a heartbreaking preview for next week’s episode, Zeek could very well be gone for good. Kleenex count: 1.) CLASS IS IN SESSION | Meanwhile, Kristina puts all her focus this week into the grand opening of Chambers Academy, her charter school created for kids just like Max… except Max is the only one that has no interest in attending. He’s against the idea for just about every reason — he doesn’t need any more friends, he gets his work done faster at home and, most traumatic of all, he still isn’t over those bullies peeing in his canteen a few months back. Kristina’s attempt at a heart-to-heart with Max doesn’t seem to stick — “You should have asked me first. I’m not going to be attending Chambers Academy,” Max asserts — but a lecture from Adam does the trick. After reinforcing just how important this endeavor is to Kristina, Max shows up on the first day of school and shakes the hand of his teary-eyed mom. (Kleenex count: 2! See, it’s like a drinking game, except waaaaay more emotional.)

WHOA, BABY | Even though NBC spoiled this for us weeks ago, we find that Amber’s hospital-bed tryst with Ryan did result in a pregnancy — and Amber’s flying solo as she hears the baby’s heartbeat for the first time. Throughout the hour, Amber’s big secret has her acting majorly hostile, especially toward Haddie (who is looking stunning, by the way). When Haddie confronts her cousin about the sour attitude, Amber admits that she’s expecting, and the two share a terrifically sweet scene on the high school’s football field, talking about the past (remember when Amber slept with Haddie’s boyfriend? Good times!) and getting freaked out by the future. With a little convincing from Haddie, Amber finally admits to her mom at the end of the hour that she’s expecting. Sarah’s reaction? “Oh.” (Sounds about right.)

NO LOVE LOST | Let’s get something out of the way: I am perhaps the biggest supporter of Joel/Julia. Their arc last season had me in a perpetually grouchy mood on Thursday nights, and I want nothing more than to see them reconcile by series’ end. But we also need to acknowledge that Julia’s new beau — Chris, her ex-boyfriend from law school and current colleague at the firm — is an attractive human being. He just is! But now that that’s settled, let’s turn to this week’s devastating Joel/Julia moments. First, Joel drops everything to help Kristina and the family get ready for Chambers Academy’s opening. Then, he drops everything to watch Victor and Sydney when Julia has a family crisis. And after that, he offers to continue dropping everything for as long as Julia needs him to. (Kleenex count: 3.) When Julia breaks down at the sight of Zeek in high spirits, Joel holds his estranged wife close — but when he kisses her, Julia pushes him away, which I suspect has something to do with all the hot sex (and maybe more) that she’s getting from Chris on the side. Sigh. FATHERS, BE GOOD TO YOUR DAUGHTERS | While Hank and Sarah keep working at their newfound relationship (they have a cappuccino maker!), they’re thrown a curveball in the form of Hank’s ex-wife Sandy, who returns to town with daughter Ruby in tow. (Disclaimer: I am going to mix up “Sarah” and “Sandy” at least once this season, because I’m scatter-brained and those names are painfully similar. Go easy on me when that day comes, folks.) Sandy desperately needs help with Ruby, who’s officially hit the teenage years and can’t be bothered to say more than a few words at a time. She can, however, find the time to confront her dad about Sarah’s underwear, which she finds lying around his apartment. (Side note: My teenage years weren’t very long ago, and I cannot imagine a single scenario in which I would pick up a stranger’s thong and ask my dad if he had anything to do with it. No. No.) Hank admits to his ex-wife that he and Sarah are seeing each other, and she’s OK with the relationship — as long as she and Hank can split 50/50 custody of Ruby, now that both ladies are back in town.

OK, your turn. What did you think of Parenthood‘s final season premiere? Is there anything more adorable than baby Aida taking her first steps? Grade the episode via our poll below, then hit the comments to back up your choice!