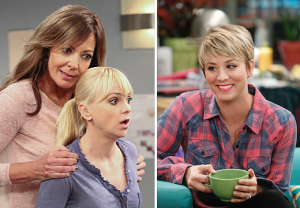 CBS is extending its Monday double-pump of The Big Bang Theory for another three weeks, and as such has pushed back Mom‘s Season 2 premiere — and to a new night.

Mom, which was to return this Monday in the 8:30 time slot, will instead opens its sophomore run on Thursday, Oct. 30, the same night that CBS restores its regular, aprés-Thursday Night Football line-up. There, the Anna Faris/Allison Janney sitcom will lead out of Big Bang Theory. (Two and a Half Men, the new sitcom The McCarthys and Elementary round out the night.)

As such, The Millers will vacate its Thursday home and claim what was to be Mom‘s time slot, premiering Season 2 on Monday, Oct. 20 at 8:30.

But wait, it gets more confusing: Mom and The Millers will trade back time slots in early January.

For the next three Mondays, through Oct. 13, The Big Bang Theory will air a new episode at 8, followed at 8:30 by a repeat of a previous episode. On Oct. 27, 2 Broke Girls returns to lead off Monday night.