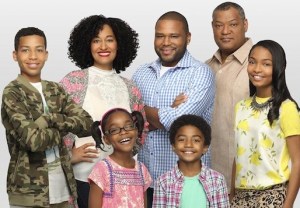 Has ABC finally found a worthy companion to Modern Family?

Based on the pilot episode of black-ish, the network’s new Anthony Anderson-Tracee Ellis Ross vehicle, a “definite maybe” is in order.

Better still, Dre’s decidedly un-PC narration threw a sharp side-eye at the co-opting of African-American culture: “In the ‘urban’ world, Justin Timberlake and Robin Thicke are R&B gods, Kim Kardashian’s the symbol for big butts, and Asian guys are just unholdable on the dance floor. Come on! Big butts, R&B and dancin’? Those were the black man’s go-tos!”

Yes, as Matt Mitovich pointed out in his “fall TV first impression” piece, the episode took a pretty silly turn at the midway point — focusing on son Andre’s wish for a bar mitzvah — but with an appealing cast further upgraded by Laurence Fishburne as Dre’s truth-bomb-dropping pop, there’s real potential here. And Anderson and Ross’ chemistry was easy and well-worn, especially during a bedroom scene that found Dre aghast at the revelation that Rainbow believed O.J. Simpson was guilty of murder.

What did you think of black-ish? Is it a good fit for the post-Modern Family slot? And will you be tuning in for Episode 2? Grade it in our poll below, then sound off in the comments!