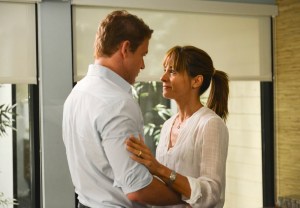 USA Network’s Satisfaction ended its freshman season with a bang — or the possibility of a bang — on Thursday, leaving every relationship (and several lives) in limbo.

By the end of the hour, Neil and Grace had decided to go to Italy together and work on their marriage, Anika was off to see Mateo in a set of wheels, Ariana’s estranged husband (Revenge‘s Henry Czerny!) had returned from his non-stop global adventure and Simon was out several very expensive paintings.

Below, creator Sean Jablonski explains why he chose to end the finale with that cliffhanger — don’t worry, it sounds like both Trumans will live — and previews what a potential second season would hold for the people in Neil’s world.

TVLINE | Gunman aside, Neil and Grace seemed pretty happy in that final moment. I hesitate to ask, but has their marriage been fixed?
Oh, absolutely not. They were about to go to couple’s therapy and have a lot of secrets come out, then they became almost manic. They were like, “We’ll go back to the beginning, where it all started, and hopefully we can put [our marriage] back together again.” I feel like it’s a worthwhile endeavor, and I think it can work, but the sins of the past always show themselves. All of that stuff is now coming home to roost, so to speak, and looking ahead at a second season … that lifestyle they were living can only sustain itself for so long. Things are going to have to get even more complicated.

TVLINE | The logical next step is for either Neil or Grace to get shot. Is that where you’re thinking a second season would start?
I don’t want to necessarily commit to that yet, because I do have a different idea about where to start a second season, and I’m not sure I like the idea of doing a “Who shot J.R.?” kind of thing. We’d have to wait for the person to recover, and it’d be a whole thing. The jeopardy is real, and it’s absolutely what you saw on screen, but I have a different way I’d like to handle it.

TVLINE | My favorite part of the episode was Neil’s speech to the investors. Can you take us inside his head in that scene?
It was about him coming full circle, looking at his life and the person he was before, who stood up in the pilot and said, “I think you’re an a—hole.” There’s a more realistic approach to life; you hope for the best and you give your all, but there are no guarantees. … In the initial scripted version, which got cut out, Victor asks who would like to write the check, then the door opens and a woman comes in. She says, “Oh my God, I’m so sorry I’m late,” and it turns out she’s the translator. She says, “They don’t speak any English. Do you mind starting over?” It played fairly funny, but when I watched it, it kind of undermined the whole moment for Neil. TVLINE | We saw them interact, but can you sort of explain Adriana and Fisher’s relationship in your own words?
Theirs is yet another window into a modern marriage, which is to say they’re two people who have been together for quite a while, then reached a point where they realized it’s not working. Rather than get divorced, he took off. She was welcome to keep the house and hold onto the money, but it made more sense for them to not go through the legalities of a divorce. They have that agreement of “You do what you want, and I’ll do what I want.” He can come home whenever he wants, but neither of them is going to judge the other or ask them to change. It’s kind of an enlightened approach; if you love someone, set them free.

TVLINE | Had Fisher not been there when Neil arrived, might things have ended differently?
Oh, 100 percent. He would have come to Adriana and made a very clear statement: “Don’t contact me again. I can make life very difficult for you.” It would have been done in much the same way he handled things with Simon. If Adriana was willing to say, “I’ll be your next client,” why would he ever believe that she would also feed him other clients? It’s clear where it was going, and it’s not about Neil getting into a relationship with Adriana — at least not in Season 1.

TVLINE | Do you see a place for Fisher moving forward, or is he off on his next adventure?
Absolutely. I think he sticks around for a little bit. It makes life way more interesting for everyone. TVLINE | I want to say “poor Simon,” but as we learned, he’s not poor. Does he know much he’s worth?
Absolutely, and at the risk of giving away too much, he had a very strong disagreement with his father, which led to him being pushed out of the family. I think he probably said, “F—k you, I’m not going to take your money,” which is why he did what he did and became who he became. Having grown up in that world allowed him to keep a lot of contacts and access to things, but now that he lost those paintings and they’ve hit the market, word’s going to get back to the family. That’ll open up a whole new world for him.

TVLINE | Now that Neil and Grace are trying to make their marriage work, is Simon done pursuing her?
Simon not trying to be with Grace is just too safe for us. We’ll definitely be exploring that more, and I think their relationship could move in a different direction, but it’s not going away.

Your thoughts on Satisfaction‘s season finale? Browse photos, grade the episode below, then drop a comment with your full review. 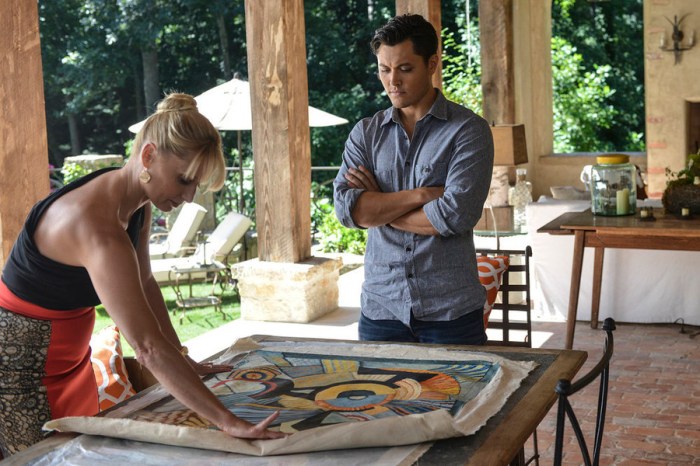