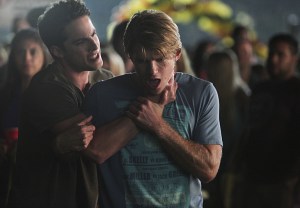 The first photos from The Vampire Diaries‘ sixth season premiere (Oct. 2, The CW) have arrived, and we’re getting all choked up — though not as badly as Luke, who’s literally being choked by everyone’s favorite former hybrid.

Yes, Tyler appears to be taking out his anger on the Wonder Twin, not unlike Elena is seen doing in the first Season 6 trailer. (Luke and Liv must have a pretty good reason to be sticking around, considering all the abuse they’re facing.)

Other highlights in the new Season 6 gallery include:

* Matt rocking what could be a Mystic Falls Police Dept. t-shirt of some sort. (Sorry, I know you were hoping there wouldn’t be a shirt at all, but this is still exciting.)

* Alaric getting his flirt on with Elena’s medical mentor Jo, played by Hit the Floor‘s Jodi Lyn O’Keefe.

* Caroline having (I assume) a tense conversation with Alaric about the current state of the group, particularly Elena and Jeremy’s downward spirals.

What do you make of the first photos from The Vampire Diaries Season 6? Drop a comment with your hopes and fears in the comments section below.