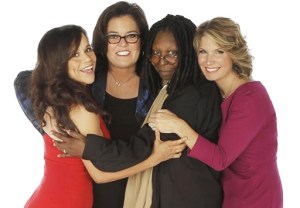 Monday marked Rosie O’Donnell‘s first day — well, first day back — as a co-host of ABC’s The View, along with returning moderator Whoopi Goldberg and new additions Rosie Perez and Nicolle Wallace. So, how’d the newly assembled team fare in its debut hour?

Honestly, it depends on who you’re asking. If you prefer your View to play out more like Celebrity Death Match — where it feels like the co-hosts are talking at each other, rather than to each other — you were probably disappointed. But if you’re a fan of civilized conversation, in which everyone agrees with each other and no one goes home crying, you probably relished the entire hour, which looked and felt extremely polished. The premiere began with the co-hosts literally receiving blessings from Barbara Walters — excuse me, Queen Barbara Walters (pictured right) — who urged them to “go out there and show them why we have the best show on daytime television.”

View-ers were then re-introduced to Goldberg and O’Donnell — as well as O’Donnell’s bare feet, which needed exposure due to her sciatica — before getting acquainted with the newbies. And despite Wallace’s blatant Republicanism, O’Donnell insisted, “I actually like her!” (Somewhere, Elisabeth Hasselbeck is like, “Say whaaaat?”)

From there, the ladies dove right into the hottest topics of the day, including the abuse scandals of NFL players Adrian Peterson and Ray Rice, as well as Hillary Clinton’s return to Iowa. There were also a few special segments, including a semi-awkward game titled “Ro or Ro?” — which challenged an audience member’s knowledge of the panel’s two Rosies — as well as a beautiful tribute to the late, great Joan Rivers, complete with a performance of Kristin Chenoweth’s “Borrowed Angels.”

The most interesting — and, sadly, shortest — part of the hour was Wallace’s introduction, during which her fellow co-hosts grilled her about working as communications chief for George W. Bush and as a senior advisor for the Sarah Palin-John McCain campaign. Wallace’s recollection of the moment she got the phone call about Dick Cheney’s infamous hunting accident was especially good.

(A few questions, though: Did anyone else think it was a little off-brand for Perez to ask Wallace when she wanted to “pop” Palin, especially following the panel’s unanimous outrage over violence in the NFL less than hour prior? And will Wallace still be able to hold her own after she runs out of White House horror stories?)

OK, let’s hear it: What did you think of The View‘s Season 18 kick-off? Do you like the new set? Who’s your favorite — and least favorite — co-host? Give us your official grade, then drop a comment with your thoughts on the whole shebang. 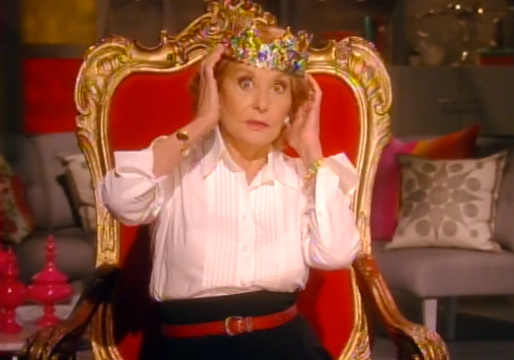