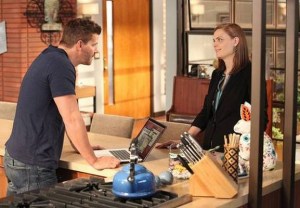 Exec producer Stephen Nathan previously hinted to TVLine that Season 10 will feature an unexpected pregnancy, and we can now reveal — via the exclusive trailer below — that the mom to be is… Daisy!

And the baby daddy? Well, it’s none other than ex-boyfriend Sweets. (Apparently a lot has happened during that four-month time jump.)

Press PLAY below to witness the big reveal — and we do mean BIG.

Oh, and did we mention that Daisy is preggars?!?! Yes? OK, cool.