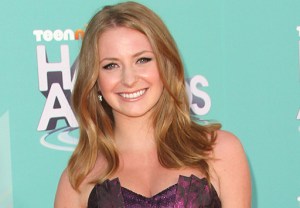 Another legendary Degrassi alumna is making her way to The CW.

This marks Arnold’s first small-screen role since wrapping her 136-episode stint on Degrassi. She broke the news herself on Friday, Instagramming this shot of herself as a “Wall Street wifey”:

Wall Street wifey for the night on @cwbatb #batb

Beauty and the Beast returns for its third season in 2015.