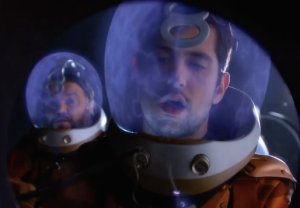 Ready for something out of this world?

Syfy, which earlier this year passed on Bryan Fuller’s High Moon pilot, is repackaging the 90-minute opener as a TV movie, and we’ve got an exclusive first look at the heart-stopping first four minutes.

An adaptation of John Christopher’s 1969 young adult sci-fi novel The Lotus Caves, the project — penned by Jim Danger Gray (Pushing Daisies) — is set in a future in which the countries of Earth have established colonies to mine the moon’s resources. However, chaos erupts after a new life form is discovered.

Press PLAY below for glimpse of Moon, and then watch the entire pilot on Sept. 15 at 9/8c on Syfy.