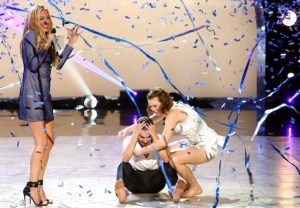 “Sometimes, there’s so much beauty in the world, I feel like I can’t take it, like my heart is just going to cave in…“

Tuesday night, I ironically trotted out that classic quote from American Beauty as I watched an oil-smeared napkin float some 10 feet above my head during Roger Federer’s U.S. Open match at Arthur Ashe Stadium in Queens. (Oh the joys of being a friend’s last-minute plus-one!)

Tonight, however, the same exact bit of cinematic poetry popped into my mind — in unexpectedly earnest fashion — as we approached the end of So You Think You Can Dance‘s stunning Season 11 finale.

For the last three months, we’ve watched 20 ridiculously talented kids push themselves — outside of their own dance styles, well beyond their personal comfort zones, probably into ice-pack-clutching physical pain — in an attempt to sway viewers of what’s inarguably a very subjective kind of competition, one that probably has as much to do with the vagaries of choreography, costume and music choice as it does actual dance acumen.

And yet there truly was “so much beauty” during tonight’s two-hour results finale: Rudy and All-Star Allison writhing through “Dirty Diana,” Zack and Ricky explosively getting down in their Battle of the Kings, Ricky and Jessica floating through that haunting Week 1 Sonya Tayeh piece, Emilio and All-Star Jasmine reprising their jaw-dropping snake-charmer duet, Jessica and All-Star Robert’s relationship drama… and so much more. (Fret not, I’m in no way suggesting that goofy routine by the winners of that Justin Bieber dance-crew mess have made the cut in my personal countdown of profoundly artistic moments.) But whether or not the declaration of a “winner” somehow is at odds with the grand, sweeping art of Fox’s unlikely reality-competition success — let’s pause here and hope there’ll be a Season 12 — that’s exactly what had to happen at the end of the two-hour telecast. So without further ado, let’s run down the facts — before doling out some additional season-finale statuettes…

4th Place
Zack (wait — I was sure he’d be the runner-up, or perhaps even the winner!)

America’s Favorite Dancer
Ricky (as we’ve kind of known since his first audition, yes? a predictable result, but a very satisfying one, too)

And now, for some other winners (and losers)…

Beast (Best?) of the Night
All-Star Jasmine Harper was so mesmerizing in that encore presentation of NappyTabs’ snake charmer dance (along with Season 11’s charming Emilio) that I kind of want Fox to turn her Degree deodorant ads into a half-hour reality series. I mean, how can one woman get that low, shake it that hard, articulate that crisply — and make the ugliest pair of genie pants in the universe look positively sexy — all in a 90-second dance? Favorite Dance of the Season
Ricky and Jessica’s “Vow” — from Week 1 of the finals — was even more stunningt the second time around. Our eventual champ’s extension reached such heavenly heights that I felt at moments like I was transported to the roof of the Sistine Chapel.

Winningest Smile
Rudy’s unabashed, megawatt grin during the Broadway-inspired opening number made my heart sing (and made me wish voters had let him go a little deeper into the competition).

Performance That Underscored Why Zack Deserved Better Than a 4th-place Finish
Zack’s very wise decision to give an encore of the haunting “Europe, After the Rain” with All-Star Amy showed the real maturity he’s gained over the course of Season 11.

Weirdest Omission
A two-hour show without so much as two seconds of ballroom? Given the range of styles represented in the Top 20, I was a little bummed by the relentless contemporary-ness of the proceedings. Was it just me? Most Welcome Guest (That I Didn’t Realize I Wanted)
SYTYCD Australia champ Michael Dameski’s solo was so physically explosive and grippingly cinematic that it left me holding my breath in suspense. I loved it so much I won’t complain about those (rubber? leather? acrylic paint?) pants.

Least Welcome Guest
That amateur-ish Bollywood dance crew that won the Season 11 sub-prize that none of us really cared about. See what happens when you get in bed with Justin Bieber? (Ugh. Sorry for putting “Justin Bieber” and “bed” in the same sentence. I’m officially the worst.)

Worst Costume
Am I crazy, or did Serge’s hip-hop skeleton shirt fit him really, really badly?

Triumph of Execution Over Concept
With its “strangers doing acts of kindness in a train station” theme, Sonya Tayeh and Christopher Scott’s group number — starring the Season 11 Top 10 and a host of All-Stars — had me worried we were headed for a tour of the cheese factory. But the emotional committment by every person on the stage somehow elevated the proceedings — and made me feel feelings I hadn’t anticipated were percolating beneath the surface.

Quote of the Night
“I just want to say to these two kings that this queen is a huge fan.” —Adam Shankman, heaping praise on Ricky and Zack’s “King of Diamonds vs King of Clubs” duet

What did you think of So You Think You Can Dance‘s Season 11 finale? Grade the episode in our poll below, then hit the comments with your thoughts.