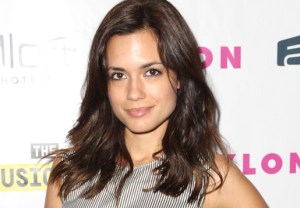 Fans of TNT’s Major Crimes will see just how far the apple falls from the tree when Torrey DeVitto guest-stars as the daughter of Lt. Andy Flynn (played by Tony Dennison).

TVLine has learned exclusively that the Pretty Little Liars and Vampire Diaries alumna will appear in Episode 13, titled “Acting Out” and airing Dec. 8, as Nicole Flynn, who is described as “professional, endearing” and wielding “a touch of Flynn’s edge and sense of humor.”

Nicole unwittingly threatens to cause a bit of a stir at the MCD, seeing as Flynn’s fam is somehow under the impression that he has a li’l something going on with Captain Raydor (Mary McDonnell). As series creator James Duff previously told TVLine, “[Andy and Sharon] are not dating, at least not yet. But Flynn’s daughter thinks they are. So when she comes to work to have a discussion with Sharon about a problem in her life, it becomes a paranoid freak-out time for Flynn.”

DeVitto’s other previous TV credits include Army Wives, One Tree Hill and Beautiful People. She also can be spied in the harrowing opening sequence for the upcoming CBS drama Stalker.