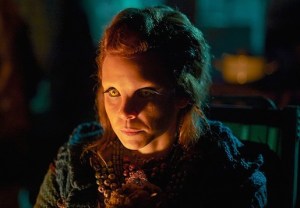 On the off chance that Syfy’s Defiance is not picked up for a third season, fans of the series should at least feel a greater sense of closure than, say, poor Longmire viewers.

Because the Season 2 finale that aired on Thursday night did much heavy lifting across two episodes, ultimately leaving not too many balls (or, you know, symbolic pebbles) in the air.

In the opening hour, booty callers Datak and Stahma arrived at a certain peace with each other, their bond

fortified when Pottinger abducted and presented them to Amanda as Kenya’s killers. (Juggling all sorts of spin as well as a sense of morality, she couldn’t bring herself to exact her revenge.) Later, Datak moved back into his home, pleasing Alak not at all — and pushing the lad into even considering an overture from Christie’s “formerly” crazy mother Pilar, who wants the lovebirds to live with her for a stretch.

Thing is, Pilar has dangled before them the promise of a hippie commune where mixed-race kids are not treated as outcasts — but known to only her and son Quentin, no such place exists.

And as the finale draws to a close, the four of them are bound for who-knows-where, with the Tarrs and Rafe in pursuit. (How they skipped a primo opportunity for Linda Hamilton to bark at the kids, “Come with me if you want to live,” I do not know. But she sure was hella entertaining when stomping around the pristine Tarr home.)

Also in the first hour, Nolan did his Iron Man best to lug dying Tommy back home, hoping to have Irisa save her onetime beau/almost fiance’s (!) life. But despite Nolan’s best efforts

— and a touching wealth of callbacks to past moments — Tommy succumbed, his death rocking Nolan, Berlin and, eventually, Irisa.

Do Yewll and her “wife” Lev stumbled across the ship that Irisa and her One True Something Kai crashed into Earth some 2,800 years ago. Soon after, Yewll realized that Lev had been “hacked” by Kaziri, as she argued the case for allowing Earth to be terraformed. Not having any of it, Yewll removed her EGO implant and made tracks for Defiance, where she surrendered herself and offered to reveres the effects of Irisa’s plan.

(She also found a moment to apologize for building Fake Kenya, but saved Pottinger’s bacon with certain omissions.)

Since Yewll’s “fix” would mean killing Irisa, Nolan fought it, muscling his way out of E-Rep custody and ultimately thwarting Amanda’s sniper shot at Irisa, who was off on her own using levitated pebbles to literally maneuver the many ships and orbs and what not in the skies above Earth. It took some doing, but Nolan forces his “possessed” daughter to reunite with Kai, at which point the Irathient fella “pulled” the second “key”out of Irisa.

They then stormed the ship and used the keys to reclaim control and use the orbs to blast everything out of the sky.

Yet after “saving the world” (minus poor New York City, TVLine’s offices included??), the cavern came crashing down around them. And as the finale faded to black, as Mercado assured Amanda — now at least literally in bed with Pottinger, argh — that Nolan and the others surely were dead, we saw that father and daughter had found refuge in one of the pods, seemingly safe and sound…?

What did you think of this year’s Defiance finale? A bit less “WTF?” than Season 1’s?