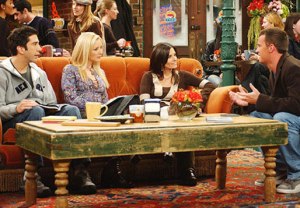 Calling all Friends fans in (or with access to) New York City: You’re about to get an exciting perk. Central Perk, that is.

In addition to providing free coffee, the pop-up location in downtown Manhattan will allow visitors to take photos on the orange couch from the show, enjoy weekly musical performances — perhaps David Schwimmer will have another go on the keyboard? — and play trivia games. Bonus: James Michael Tyler (aka “Gunther”) will make special appearances.

* Hulu has acquired exclusive streaming rights to Party Down, Starz’s short-lived comedy about aspiring actors who work for a Los Angeles catering company. Every episode of the series — whose cast includes Adam Scott, Lizzy Caplan, Jane Lynch and Megan Mullally — will be available on Hulu Plus starting Aug. 29, while the first five episodes will be available for free on Hulu.com for a limited time.

* Just days after its debut, Netflix has renewed Will Arnett’s animated series BoJack Horseman for a 12-episode second season, per The Hollywood Reporter.

* A new trailer has been unveiled for Showtime’s upcoming drama The Affair, which stars Dominic West (The Wire) and Ruth Wilson (Luther) as two unfaithful spouses. Press PLAY on the video below to hear West’s Noah and Wilson’s Allison tell a few white lies about their illicit romance. The Affair bows Oct. 12.